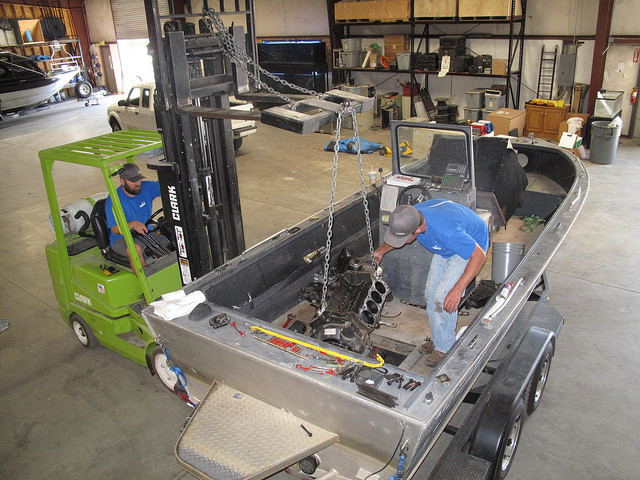 The day our field crew first came across this jet boat, it was clear it had been through a full, eventful life and its working days appeared numbered. It sat on a rickety trailer with a large pool of oil below it. The exterior hull had heavy hardwater stains, all the upholstery was torn and cracked, and the interior decking had almost completed rotted away. The steering column was wobbly and the instruments were barely readable. The engine was in the worst shape of all: it had two cracked heads, a damaged drivegear, and the jet impeller had seized in place. But whether it was their keen eyes or confidence in their abilities, our crew bought the boat that same day and brought it home. When the boat first rolled into our shop, a few chuckles were heard from our office staff. But after the crew finished the initial teardown and cleanup of the boat, a transformation had begun. 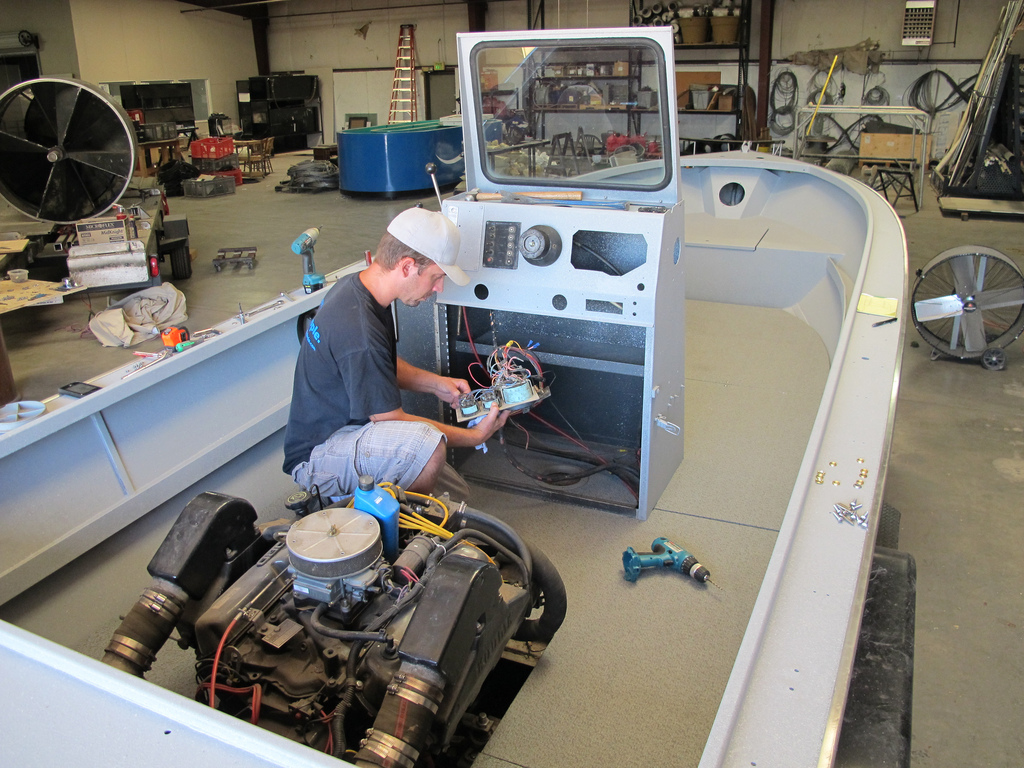 Our mechanics loved that the boat came with a powerful, inboard 351 small block Ford motor, a four-barrel Holley carburetor and a beefed-up jet impeller. Unfortunately, all three components required rebuilding: the jet impeller had seized, the carburetor was completely gunked up and had missing parts, and the motor had two cracked heads. Once we removed the motor replaced or rebuilt the needed parts, the power and torque of the boat returned quickly. Next came the steering column and instrument cluster: we decided it was easier to replace each of the instrument gauges than try to salvage the existing ones. Doing so revealed something unexpected: as a former Sheriff’s patrol boat, much of the wiring had been altered to accommodate all the lights, sirens, and emergency equipment needed for the Sheriff’s department. Once this emergency equipment was removed, most of the wiring had been severed or damaged, so our crew decided to rewire the entire boat and give it some custom features, like outlets and lights positioned for easy access during our nighttime surveys.

We next replaced the decking and gave it a special non-slip paint treatment to both protect it from the weather and surface abrasions.  We were so impressed with the results, we decide to coat the entire interior of the boat with the same product. After all the rebuilding, replacement, and restoration, a last polishing of the Alumaweld hull made the project complete. The final product bares little resemblance to the Sheriff’s boat that was near the end of its useful life and likely headed to a scrap heap. Rather, the boat our crew created is at the beginning of a long life monitoring fishes in California, and shares a stable with our other cherished research vessels.