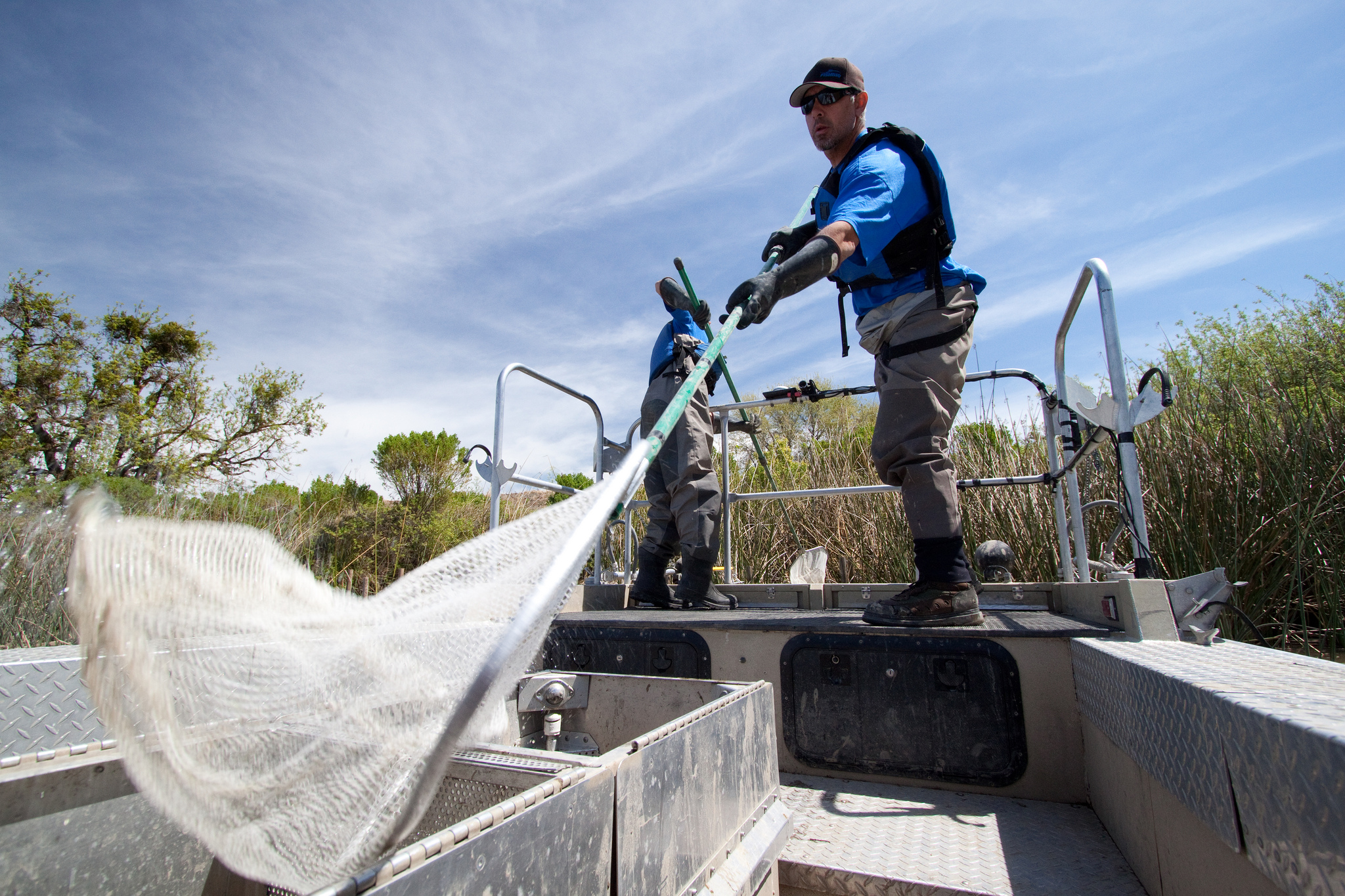 Scientific issues in the Sacramento-San Joaquin River Delta and San Francisco Bay (“Bay Delta”) are so complex and wide-ranging that conferences related to the region become a bit of a reunion for the diverse array of research groups, agencies, and universities involved in the study of this important ecosystem. FISHBIO staff attended the recent 2014 Bay Delta Science Conference in Sacramento, where we presented two talks on our recent work, attended many others, and had several thoughtful discussions and idea exchanges related to fisheries research.

FISHBIO Principal Andrea Fuller gave a presentation highlighting the recently completed Honolulu Bar restoration project on the Stanislaus River. Her talk noted that even comparatively small-scale restoration projects can help address the scarcity of suitable spawning and rearing habitat for anadromous salmonids in California’s Central Valley. Such restoration can also have nearly immediate benefits: we observed a high density of spawning salmon and rearing juveniles in the project area the first winter following project completion The talk prompted some interesting conservations regarding habitat restoration and threats to California’s salmonids, and is now available to view online.

Our fisheries biologist Michael Hellmair presented key findings of a multi-year project evaluating the performance of levee designs on the mainstem Sacramento River. His talk reviewed environmental factors that influence juvenile Chinook salmon habitat use at different levee sites, and project results suggest that fish more frequently occupy habitats on levees that incorporate mitigation features than on levees that lack such enhancements and consist solely of large angular rock (i.e., “riprap”). The presentation also noted the effects of habitat variables on introduced species that may prey upon the salmonids that the mitigation features are intended to benefit, and is now available to view online.

Among the interesting talks we attended was a study of isotopes in otoliths (earbones) to reconstruct life history patterns within salmon populations on the Stanislaus River, authored by a UC Santa Cruz researcher and supported by a large collaboration of research and management entities. While a large number of juvenile Chinook salmon leave Central Valley rivers as fry, it was generally thought that these small individuals would survive poorly and contribute only minimally to returning adult populations. Study results indicate that although fry survival is very low, the sheer number of individuals emigrating at this size can result in a contribution of 20 percent or more to returning adults, highlighting the importance of diversity in life history strategies to the persistence of salmon populations in the Central Valley.

Other talks we attended by researchers from the National Oceanographic and Atmospheric Administration’s Southwest Fisheries Science Center (NOAA SWFSC) discussed how genetic analysis of hatchery steelhead and Chinook can provide novel insights into the heritability of migratory and reproductive patterns. By obtaining a “genetic fingerprint” of adult individuals at a hatchery, every resulting offspring can be assigned to its respective pair of parents based on its own genetic makeup. This technique can be used to identify salmon from ocean fisheries to their stocks of origin, and to investigate how traits such as age at maturity and spawning date are passed from parents to offspring.

An interesting session was held on innovative approaches to non-native predator assessment in the Bay-Delta. Most studies focused on predation at certain hot spots in the region, and identified relative or average predation rates in these areas. Researchers from NOAA SWFSC and University of Washington described results of two different predator removal studies in the region. One study conducted at a predator hotspot found that the survival of juvenile outmigrating salmonids increased at the hotspot after a striped bass removal event, and stomach contents of the removed fish confirmed predation on salmonids.

We also listened to a session on Science and the Media, which hosted a panel of water and Delta communication experts from the Sacramento Bee, KQED, and Maven’s Notebook, among others. The panelists discussed ways that Bay-Delta scientists can better communicate their work, such as providing context for complicated topics like the Delta, (whether in the form of different perspectives or history), and being prepared to answer questions like why people should care about declining fish populations, and the consequences of the Delta transforming into a non-natural place. We appreciated the chance to learn so much about Bay-Delta science, and wholeheartedly agree this science should be communicated not just at conferences, but throughout the year in a variety of forms.