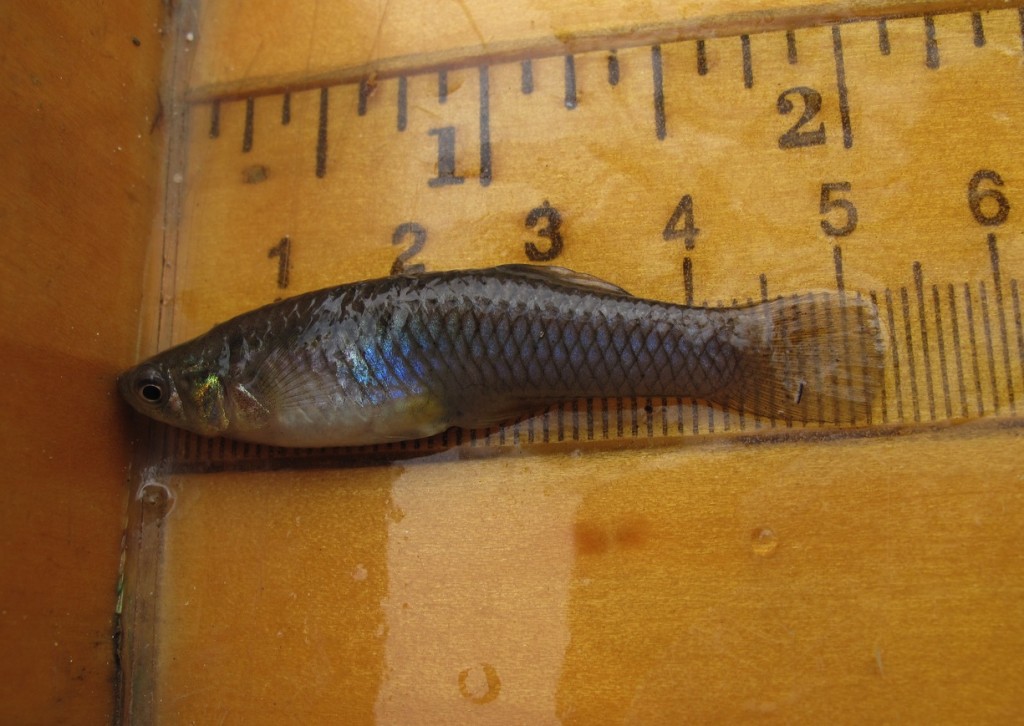 The Western mosquitofish (Gambusia affinis) is a fish in the order Cyprinodontiformes that is non-native to California.  This little fish is native to the central United States, including the Mississippi River drainage, and its southern extent reaches the Gulf Coast of northeastern Mexico. The species has been widely distributed throughout the United States and world, primarily for mosquito control (Schleier III et al. 2008). Mosquitofish were introduced to California in 1922 (Moyle 2002), and have since become widespread. At  FISHBIO, we occasionally capture them during our rotary screw trap operations and seining surveys in California waterways, such as in the Sacramento River.

While their name implies that these fish specialize in eating mosquito larvae, they often seek out other prey items when available, including aquatic macroinvertebrates, eggs of both fish and amphibians, algae, and fishes – including other mosquitofish (Schleier III 2008). Though small in size with a maximum total length of about 7 cm, these fish can pack an ecological punch, and have created large impacts to ecosystems where they have been introduced. The Western mosquitofish is a voracious predator, and has contributed to the extirpation of fish species such as the Sonoran topminnow, Poeciliopsis occidentalis (Meffe 1983). They are also believed to indirectly cause water quality degradation through their selective feeding on zooplankton, which results in algae blooms (Hulbert et al. 1972).

The Western mosquitofish is still distributed for mosquito control to the public in many states and some counties in California, such as San Diego County and Orange County. These counties warn that mosquitofish should only be used for at-home ponds and pools, and should never be released in any natural waterways. Nevertheless, the mosquitofish has already established itself as part of California’s freshwater fauna.