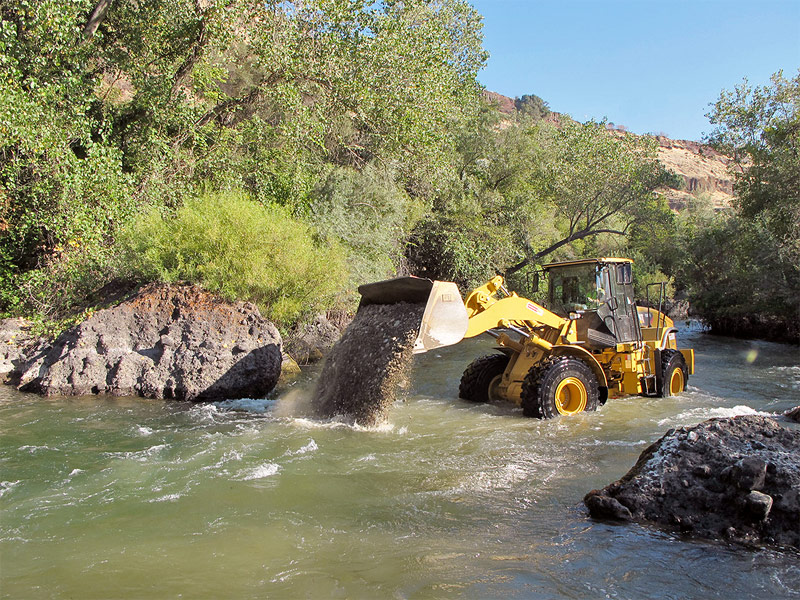 Many rivers in the Western U.S., including the Stanislaus River, have been severely degraded over time due to dams, water diversions, and gold and aggregate mining. During the 1940s over 1 million cubic yards of gravel were removed from the lower Stanislaus River channel, eliminating 55% of the spawning riffles over an 8 mile stretch of river. The upstream dams block coarse sediment supply and worsen the problem, so the remaining riffles become armored in sediments and smaller as they erode away. Unfortunately, the limited amount of spawning habitat on the Stanislaus only supports redds from about 1,250 female Chinook salmon and late arriving females may create redds on top of early redds (i.e. redd superimposition), killing the incubating eggs (Mesick 2001). To help mitigate this problem, the U.S. Bureau of Reclamation (USBR) is required by the Central Valley Project Improvement Act (CVPIA) to increase the availability of spawning gravel and rearing habitat by replenishing gravel in the river. The USBR, in cooperation with the California Department of Fish and Game, has added 17,000 tons of gravel since 1997 with an additional 5,000 tons added this year (USBR). The USBR will continue adding an additional 3,000 tons annually to meet the state and federal water operations target of placing 50,000 cubic yards of gravel by 2014 (OCAP). With above-average snow pack in California this year, river flow has been high all summer making it difficult to conduct in-stream work, but the USBR used a small window of opportunity to reduce the flow from 2,000 to 400 cubic feet per second for two weeks in order to add gravel before fall-run Chinook spawning gets underway.