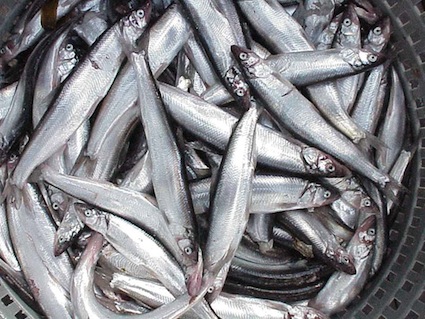 Last week NOAA announced that it has listed the Pacific smelt as threatened under the Endangered Species Act. The small and silvery Pacific smelt, (Thaleichthys pacificus), is known by many aliases. Most commonly known by the Native American name eulachon (or “oolachon”); it is also called candlefish, since it has such high fat content during the spawning season that the dried fish can be strung up and burned like a candle. The Native Americans in the Pacific Northwest have a long history of using the eulachon for food, oil and for trade. In 1806, Meriwether Lewis of the Lewis and Clark Expedition was so impressed with the fish that he drew a picture of the smelt in his journal. In 2007, the Cowlitz Indian Tribe in Washington State petitioned NOAA to list the fish when they became concerned over declining smelt runs. Currently, there is a broad commercial and recreational fishery for the eulachon, and it is an important prey item for many marine fishes and mammals.

Like salmonids, eulachon are anadromous, spending several years at sea before returning to the streams to spawn from winter through spring. Historically the species ranged from Northern California to the Bering Sea, with two distinct populations recognized along the West Coast. The population listed as threatened is the southern population from Mad River, CA to British Columbia.

For more information on the listing please see: NOAA