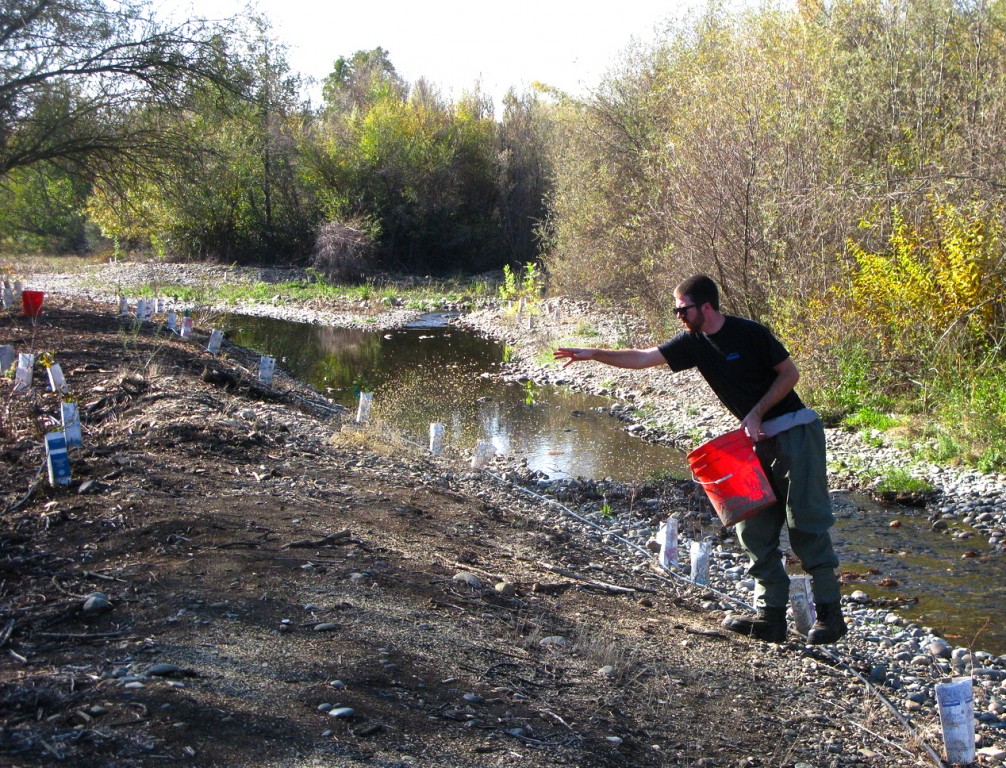 Habitat restoration is no small feat: it requires years of monitoring and constant effort to repair and maintain a healthy restored habitat. Monitoring the performance of a restored area not only includes sampling for macroinvertebrates (see Focus on fish food) and assessing salmonid populations (see Who’s at home?), but propagating vegetation as well. Vegetation survival is important to the growth and survival of reintroduced native wildlife in turn, since native plant species help provide appropriate habitat for both riverine and terrestrial animals. The species reintroduced to the Honolulu Bar restoration site shown above are typically found in riparian habitats occurring throughout the Central Valley.

The FISHBIO technician seen here is broadcasting a mix of seeds native to Californian riparian habitats. This mix of western goldenrod, evening primrose, gumplant, and others will play an important role in establishing an effective ground cover to keep invasive species from overtaking the area. In addition to the scattered seeds, plugs of creeping rush and Santa Barbara sedge were planted intermittently throughout the floodplain. The seeds and cuttings lay the groundwork for an appropriate vegetation structure that provides food and cover for terrestrial species, and helps protect the floodplain from excess erosion and changes to its physical characteristics. 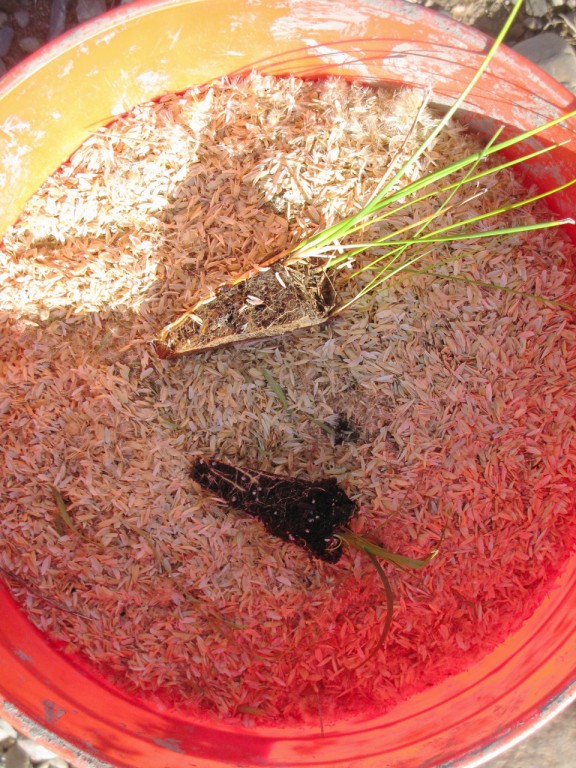 During the floodplain reconstruction, several types of common invasive plant species were removed (see On the (invasive species) battlefield). The Tree-of-Heaven (Ailanthus altissima) is an invasive commonly found near California waterways. It can change streambed ecology by forming dense thickets that crowd out native plants, alter physical habitat, and produce chemicals that prevent other plants from taking root nearby. Established trees can be incredibly difficult to remove, as they can reproduce by sending out shoots or re-sprouting from root fragments left in the soil. The Himalayan blackberry (Rubus discolor) is another common riparian intruder that is highly competitive and rapidly displaces native plant species. Blackberry thickets can become so dense that they block terrestrial animals’ access to the water, and the lack of light can severely inhibit the growth of ground cover species. These invasive plants, among others, display highly aggressive growth and reproduction rates. The most effective way to combat these common intruders is to prevent their introduction in the first place, such as avoiding their use in landscaping. When choosing ornamental species for your home garden, it’s worth noting that there are many beautiful plants native to California to choose from.