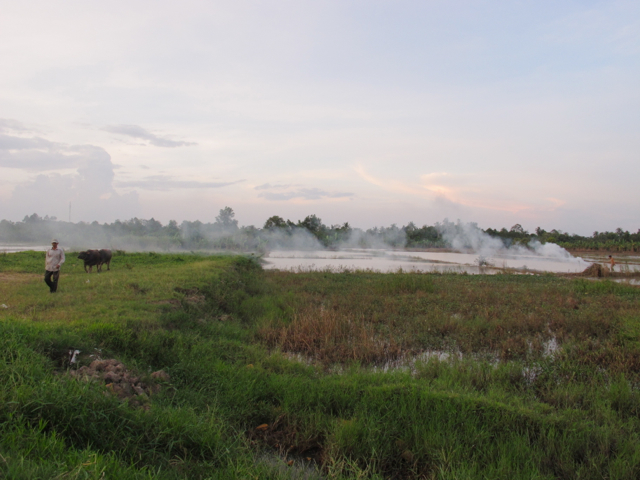 As biologists, we often think about climate change in terms of its effects on wildlife and the environment (see Warming oceans alter fish catches, Alpine snorkeling). However, there is a human element in this equation as well. Climate change can potentially devastate the livelihoods of millions of people and the socio-economic stability of entire societies. Vietnam, for instance, is at particularly high risk. According to policy and climate experts, Vietnam’s Mekong Delta—one of the most fertile areas of Southeast Asia—faces a grim future as a direct consequence of climate change.

Vietnam is no stranger to destructive weather events, such as tropical storms, flooding, and drought, but climate change would make these hazards worse. The region’s low-lying elevation and complex set of tributaries make it highly vulnerable to rising sea-levels and salt water intrusion. According to an assessment by the United Nations, CARE, and the Center for International Earth Science Information Network at Columbia University, a 1 m sea-level rise could displace more than seven million residents of the Mekong Delta, and a 2 m sea-level rise could double that number (Warner et al. 2009). The Center for a New American Security, a U.S. public policy think tank, claims that a 2 m sea-level might even threaten densely populated urban areas, like Ho Chi Minh City (Burke et al. 2008).

The Center for a New American Security estimates that the mass migration of Mekong Delta residents to urban areas might also compound the pressures on Vietnam’s natural resources and the environment. U.S. Department of Defense officials have recently voiced concern that mass displacement of Mekong residents, when combined with the economic fallout from the loss of fertile lands, might lead to regional instability. Admiral Samuel Locklear (USN), who heads the U.S. Pacific Command, stated that he considers climate change to be the biggest security threat in the Asia-Pacific region over the long term. Vietnam’s Mekong Delta showcases the potential impacts of climate change on societies not only in Southeast Asia, but also around the globe.