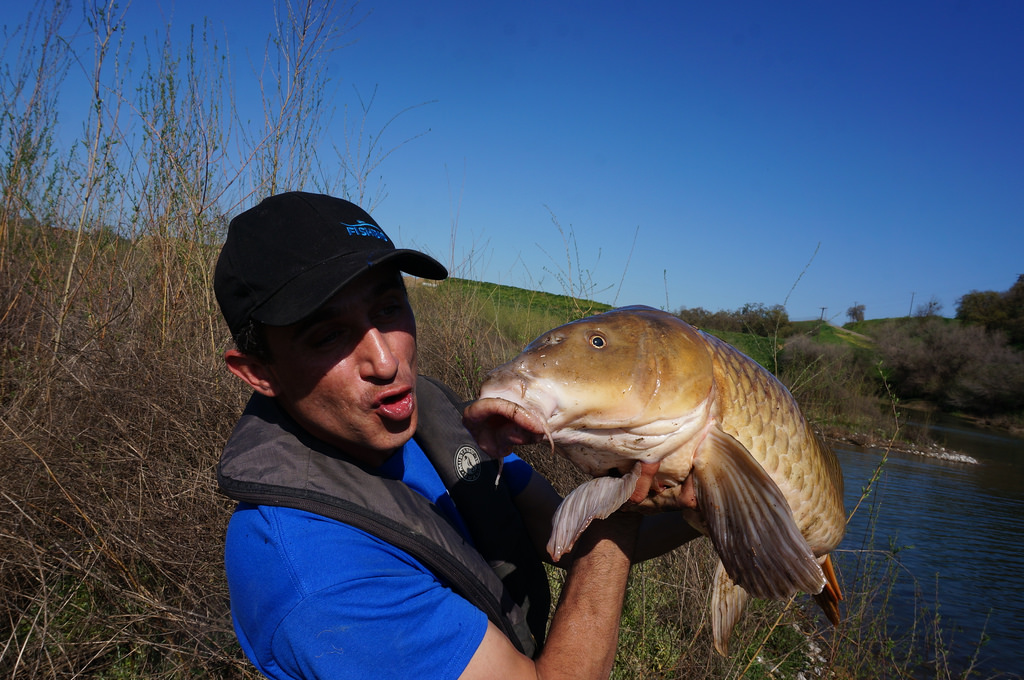 In today’s Flashback Friday we dive into the details about the common carp.

Our recent quest to determine the most interesting fish in the world revealed that common carp, Cyprinus carpio, are common indeed – especially in the scientific literature, where the species is second only to rainbow trout for the number of published scientific studies. Human interest in carp is manifold: they are used as a model organism for research in many disciplines, have been used in aquaculture for centuries, are widely distributed, and have become a very successful aquatic invader. In the United States, common carp are perhaps best known for their detrimental effects on native ecosystems. Reduced water clarity and declines in aquatic vegetation are often the most visible effects of bottom-feeding carp, which tend to uproot plants and stir up fine sediment. Carp were deliberately introduced in North America by government agencies in the late 19th century for use as a food fish. However, people never developed a large appetite for carp, despite the species’ role as a culinary staple and traditional holiday dish in many other countries. Carp, able to produce more than a million eggs per year, thrived and quickly multiplied in many North American waterways. State agencies that had deliberately and successfully introduced carp began efforts to eradicate them just a few decades later – efforts that were just as deliberate, but not nearly as successful.

Around the world, countries have found creative ways to embrace or eschew carp. In Australia, management authorities are willing to go to extreme measures to stem the invading tide: an eradication program that would introduce a herpes virus deadly to carp but not to other fish is currently being evaluated. While invasive carp pose threats to native biodiversity in many places, in the highly modified cultural landscape of Europe, low-density carp ponds appear to have become an important element in wildlife conservation strategies. Carp have been cultured on the continent for centuries, and a variety of water birds and amphibians, including many rare species, find refuge at carp-pond complexes (Kloskowski 2011). Pond culture of carp continues as an industry today, and worldwide aquaculture production of carp exceeds 3 million tons, roughly the combined weight of farmed and wild-caught salmon worldwide. While the majority of farmed carp are sold as fresh or frozen whole fish, other carp products are marketed as well. Carp roe (eggs), sold as “tarama,” are traditionally used in Greek cuisine, and are increasingly found in American stores. Some companies have even turned to carp skin as a raw material for small leather products such as wallets and shoes.

Despite its popularity in some arenas, the common carp has struggled to gain recognition as a sport fish in the United States. In other parts of the world, particularly in Europe, these fish are highly sought-after by anglers. Carp angling drives invention and the tackle industry in England (where carp tackle account for nearly 40 percent of tackle sales, with annual revenues upwards of $300 million), much like the bass fishing industry in the United States (where smallmouth and largemouth bass account for about 25 percent of angler expenditures). Endearing nicknames (such as “Heather the Leather”) are bestowed upon charismatic carp that are caught multiple times, and anglers are willing to travel far and wide in pursuit of bottom-feeding goliaths (carp can reach weights approaching 100 lbs!). France, in particular, has become a travel destination for carp-aficionados seeking to hook a heavyweight, and a multitude of tour operators and travel agencies now cater exclusively to carp anglers. Diverse perceptions, uses, and impacts of carp in the many regions where they are now found fuel continuous interest in this fish from different sides. It just shows how one person’s pest can be another person’s prize.