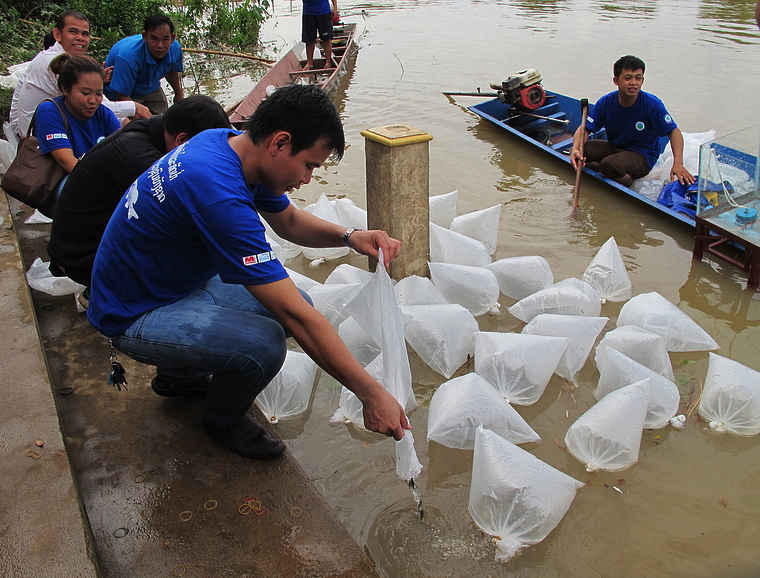 Lao PDR’s National Aquatic and Wildlife Day is celebrated on July 13th each year. As part of this annual celebration, people across the country released hatchery-raised fingerling fishes into lakes, ponds, and rivers – hence, the holiday is also known as “Fish Releasing Day.” The objective of the day is to draw attention to the conservation and protection of Lao PDR’s diverse terrestrial and aquatic wildlife. Lao PDR is home to an impressive array of biodiversity and some of the best remaining habitat in Southeast Asia. However, the fast pace of development and the over-exploitation of wildlife pose a threat to this biodiversity (see The Mekong at an environmental crossroads). Recognizable and charismatic wildlife, such as Asian elephants, Indochinese tigers, Siamese crocodiles, and gibbons are endangered, targeted by poachers, and in need of conservation. Additionally, many lesser-known endangered wildlife, such as the Jullien’s Golden Carp, also need protection (see Living treasure). Thus, events of this special day included education about the country’s biodiversity, as well as local and national laws concerning fisheries and wildlife protection. 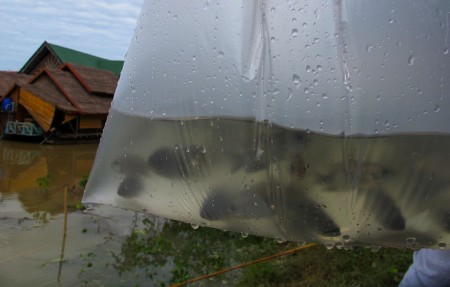 As a supporter of this year’s National Aquatic and Wildlife Day, FISHBIO was honored to be invited to attend a fish releasing ceremony in Ban Hai near Vientiane. The highlight of the ceremony was the moment when each person was invited to go down to the riverbank and release a bag of juvenile fish into the water. Alas, it seems that the event organizers were unable to obtain enough hatchery raised native fish species to release during the event. So instead, the participants ceremoniously released hundreds of thousands of juvenile tilapia (a fish species native to Africa) into the river. This may not have seemed odd to the vast majority of the participants, since tilapia are so ubiquitous throughout the Mekong Basin that many people in the region believe it is actually a native species. While we are inspired that Lao PDR has set aside a day to celebrate its remarkable biodiversity, we hope that in the future, Fish Releasing Day can focus primarily on celebrating and protecting the vast diversity of species native to the country.