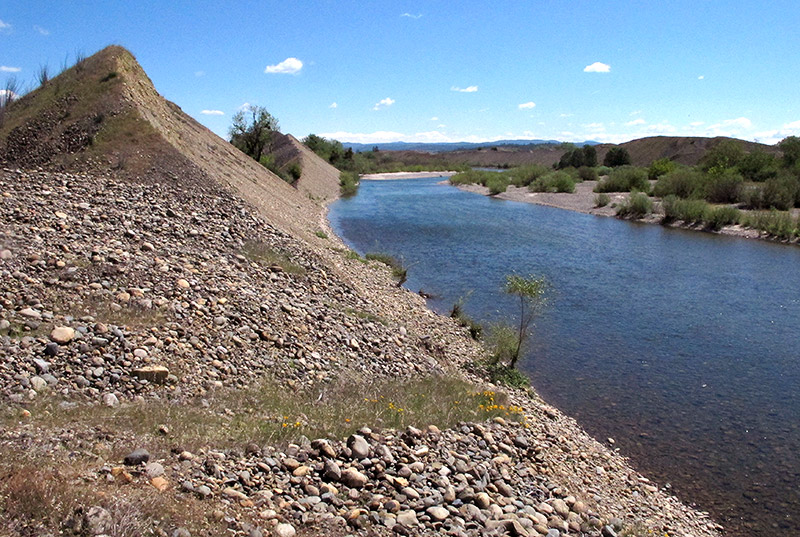 Since gold was discovered in the American River watershed in early 1848, many rivers in California have been impacted by numerous phases of mining and land-use practices. Nowhere are these changes more evident than in the area of the lower Yuba River just upstream of Marysville, California. Nearly 9,000 acres in size, this area referred to as the “gold fields” (shown in the photo) was inundated by massive amounts of sediment washed down the river from years of hydraulic mining that occurred between the early 1850s and 1883. In the gold fields on the lower Yuba River, an estimated 331 million cubic yards of sediment was deposited (Gilbert 1917). This massive volume of material, ranging in depth from 16 to 82 feet, overwhelmed the river’s capacity to transport the sediment, which caused the river to braid into many different river channels. Beginning in 1906, the gold fields were dredged to mine the remaining gold, with as many as 12 dredges operating at once (cbec 2010). Primary impacts of the dredging were in the form of large training walls made up of gravels and cobbles, which were built to block the river’s natural course and open up more areas to mining. The remnants of past dredging can be seen to this day, not only in the Yuba River, but also on the Feather, American, Stanislaus, Tuolumne, Trinity, and Klamath Rivers, among others.

The legacies of both periods of mining activity are still affecting California’s salmon and steelhead populations. On the lower Yuba River, primary impacts are an overall lack of complex habitats, a loss of riparian habitat (especially large trees such as cottonwoods and sycamores), and a loss of connection between the river and its floodplain.  All of these issues have reduced the overall capacity of the lower Yuba River to provide quality rearing habitats for juvenile salmon and steelhead. Because of historical and more recent modifications to its habitat, the Yuba River is currently receiving much attention to improve rearing, migration, and spawning conditions to benefit spring- and fall-run Chinook, steelhead, and green sturgeon.