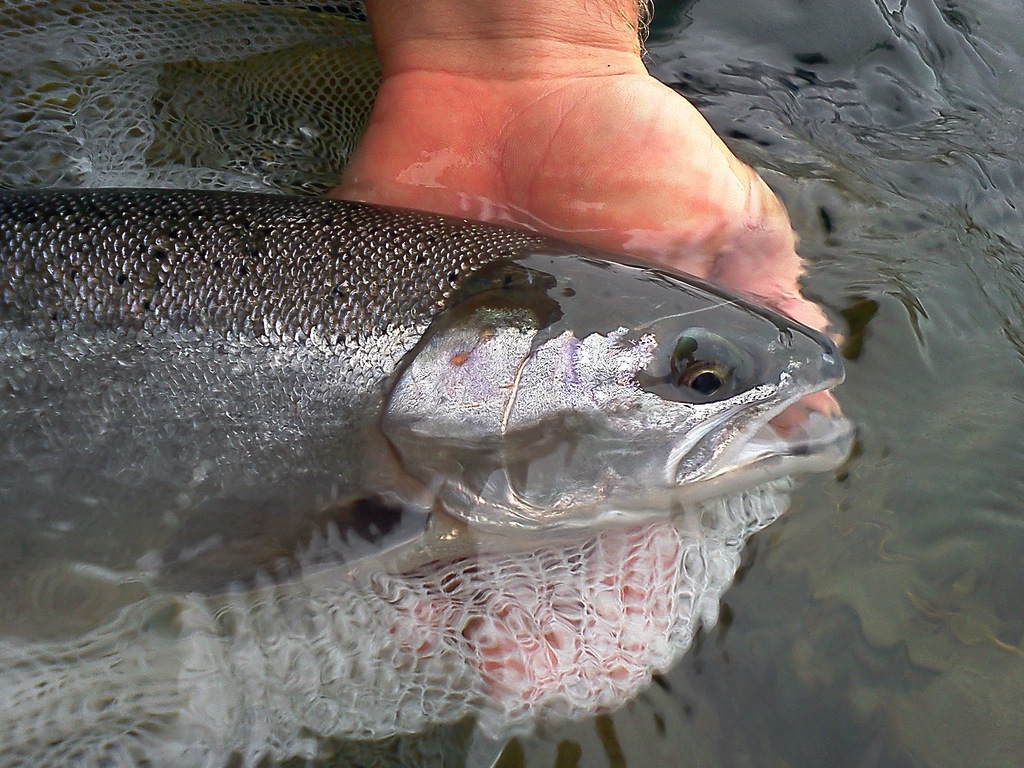 Our photo and post on rainbow trout life-history was recently featured on Instagram, so we thought it was worth revisiting the mystery of what differentiates rainbow trout from steelhead. Enjoy!

Genetically they are the same species, but rainbow trout and steelhead lead very different lives. These fish represent two separate life strategies of the species Oncorhynchus mykiss: a resident form that stays in freshwater (rainbow trout), and an anadromous form that migrates to the ocean (steelhead). For years, researchers have been unable to identify specific traits that will determine whether a given O. mykiss will exhibit anadromy or residency. This lack of definitive evidence has compelled managers to treat the species as a single population. Most management actions on the West Coast focus on the fact that steelhead are threatened or endangered in California, Oregon, Washington, and Idaho; however, most populations of resident rainbow trout are abundant in their native streams. In a study published in the Canadian Journal of Fisheries and Aquatic Sciences earlier this year, a group of scientists from agencies, universities, and non-profit groups came together in an effort to better understand why O. mykiss can possess both anadromous and residency life-history traits. Understanding the tendencies of these fish may help researchers determine best-fit management strategies for populations in different environments.

Through their research, the team was able to identify genetic and environmental factors that may influence the different life history strategies (Kendall et al. 2015). The gene expression that leads to smolt transformation is one trait they identified as promising for understanding the differences between anadromous and resident individuals. Higher metabolic rates were also identified in anadromous populations of O. mykiss. This supports previous studies on other salmonid populations that have shown higher metabolic rates can lead to lower energy conversion, resulting in lower lipid storage and a higher rate of anadromy (Morinville and Rasmussen 2003). Another study has shown that in streams where resident populations of O. mykiss are abundant, a measurement of their lipid content, called the condition factor, reveals higher fat content in these resident populations (Beakes et al. 2010), suggesting that food availability is high and the fish are able to thrive without the need to migrate.

Environmental factors that appeared to influence life-history patterns included water temperature, stream flow, freshwater food abundance, and marine survival. Residency was more predominant in watersheds with cooler temperatures, higher summer flows, adequate food availability, and suitable spawning habitat for smaller females. The current Central Valley Water Project Biological Opinion’s Long-term Operational Criteria and Plan (OCAP) requires that minimum flow and temperature criteria be met in order to protect steelhead. Based on the findings of Kendall et al. (2015), managing for cooler temperatures and higher flows may actually reduce the likelihood that O. mykiss choose anadromy over residency, and while it may appear that the steelhead population is declining, they could in fact be choosing a more suitable life strategy.

Overall, the article identified general characteristics that may lead to anadromy; however, there was no single trait that could be used to positively predetermine if an O. mykiss would choose one life strategy over the other. Through an intricate interaction of its genes, the state of the individual fish, and the environment, it is possible to determine if a fish has a greater likelihood of exhibiting anadromy vs. residency, but such predictions are still full of uncertainty. It seems plausible that anthropogenic influences on the environment have created conditions that favor a life of residency within the population. More work is needed to better understand the effects of water temperature, the impacts of food supply, anadromous survival through freshwater and marine migration, and the effects that residency will have on the future of anadromous traits in O. mykiss. Study co-author John McMillian, the science director for Trout Unlimited, told the Columbia Basin Bulletin that such diversity of life history traits is a key part of the species’ evolutionary success, but this complexity presents many challenges for management. One thing is certain: as McMillan stated, “There is no ‘normal’ population of O. mykiss. They literally are the fish of a thousand faces.”