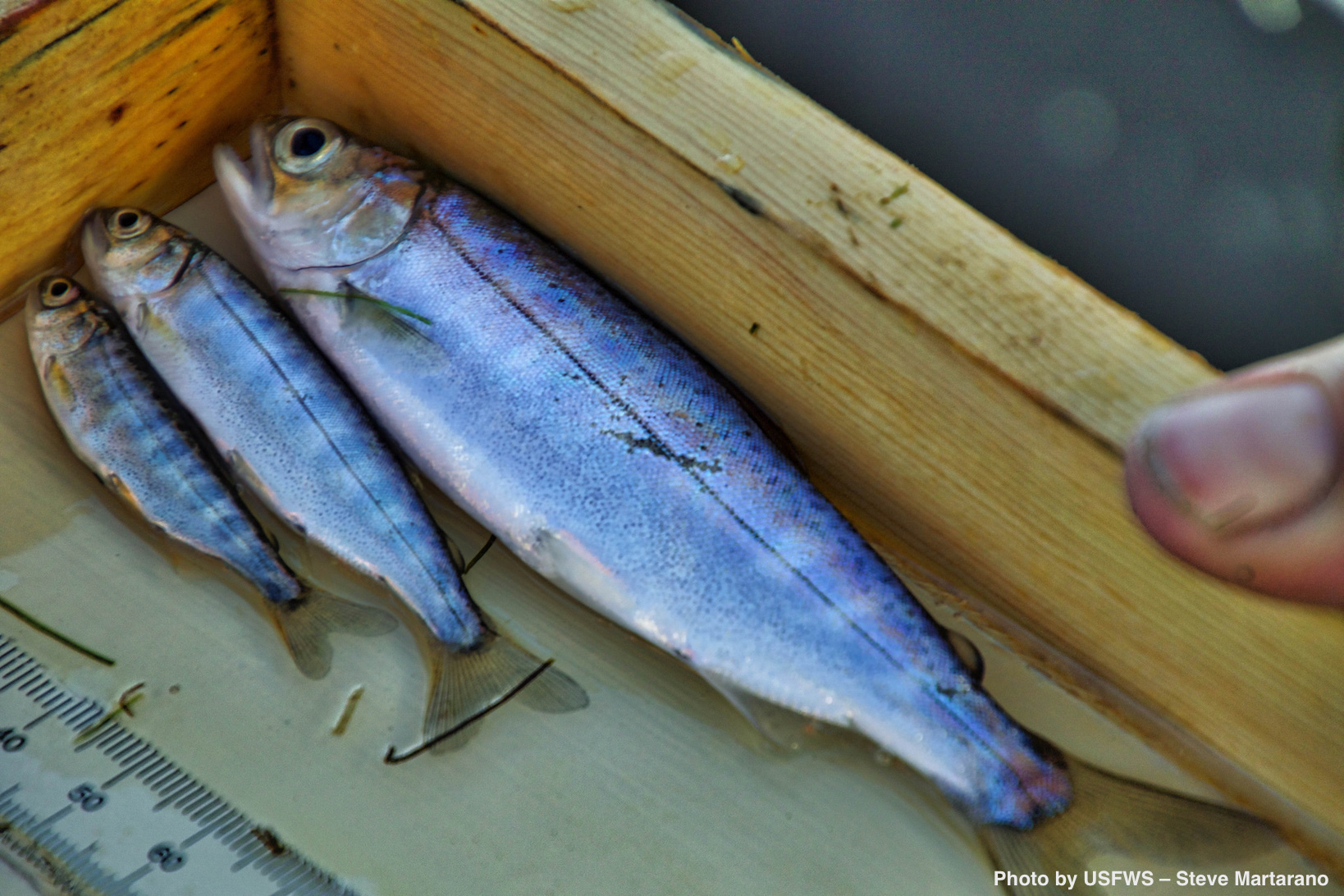 In today’s Flashback Friday, we explore the driving factors creating diversity within the winter-run Chinook salmon populations in the Sacramento River.

Just when you think you’ve got a species figured out, sometimes they show up where they’re “not supposed to be” and make you reconsider. This recently happened in the fish world, when adult winter-run Chinook salmon, an endangered fish previously thought to only inhabit the mainstem Sacramento River downstream of Keswick Dam, were found to have actually reared in multiple Sacramento River tributaries as juveniles. A collaborative team of researchers made the discovery when they examined the otoliths, or “ear bones”, of returning adult winter-run, and identified where the fish had reared as juveniles by comparing ratios of strontium isotopes found in the water of various rivers to those in the fish’s otoliths. Their findings, recently published in the journal Biological Conservation, suggest that in a given year, as many as 65 percent of returning winter-run adults spent time in previously unknown rearing habitats as juveniles (Phillis et al. 2018). This makes these newly identified habitats critically important for the continued existence of winter-run Chinook salmon.

Winter-run Chinook salmon historically numbered in the hundreds of thousands of adults that migrated up the Sacramento River every year, but the construction of Shasta Dam and Keswick Dam blocked access to their historic spawning habitat in the 1940s.  The Sacramento River supports the only population of winter-run salmon in California’s Central Valley, and their yearly migrations now average a few thousand to only a few hundred adults. The fish are particularly vulnerable to environmental conditions and water releases from Keswick Dam in their new restricted spawning habitat downstream. This vulnerability was particularly evident in 2014 and 2015, when warm water releases from the dam killed nearly all of the winter-run eggs in the river. Identifying critical habitat for a species allows managers to focus conservation efforts in locations where they can provide the most help. However, the finding that more than half of returning adult winter-run Chinook may be living in rivers without temperature criteria to protect them as juveniles means the population is susceptible to an even longer list of potential stressors than previously thought.

These newly identified areas, called “non-natal habitats” because they differ from where the fish was born, can be divided into four distinct groups, including the Mount Lassen tributaries (Mill, Deer, and Battle creeks), the Sacramento-San Joaquin Delta and Feather River, the American River, and a final group rearing in an uncertain location that is not in the Sacramento River. The researchers examined otoliths from winter-run salmon that returned in 2007–2009 and found that between 44 and 65 percent of returning adults had reared in non-natal habitats, with the average being 58 percent. The proportion of fish rearing in specific non-natal habitats also varied from year to year, with an average of 21 percent of fish using the American River, 18 percent using the Mount Lassen tributaries, 15 percent using the Delta/Feather River habitats, and 4 percent using other non-natal habitats. Fish that reared in the Sacramento River as expected and those that reared elsewhere grew to similar sizes when they transitioned from freshwater to saltwater, suggesting the habitat quality in the non-natal areas is as good as natal rearing habitat in the Sacramento River.

Rearing in an array of habitats provides diversity in the winter-run Chinook salmon population. This “portfolio effect” helps buffer the population against any catastrophic events that might wipe out the local population in one habitat, while allowing surviving populations in the other habitats to continue contributing to the population. In a climate as dynamic as the Central Valley, diversity is especially important for an endangered species such as winter-run Chinook salmon, which uses only one main reach of the Sacramento River for spawning. The large proportion of juvenile salmon using non-natal habitats that survived to return as adults suggests they are relatively important to the population, and a lack of critical temperature thresholds in these areas could leave winter-run Chinook salmon vulnerable to disturbances in these habitats. However, given the large number of juveniles using these areas, efforts to restore and protect these habitats could have large positive effects on the population as a whole. So even though we might think winter-run are “not supposed to be” using these tributaries, the fish are actually spreading the risk of extinction across multiple habitats to safeguard their future.