Many rivers have had huge quantities of gravel extracted from active river channels, resulting in a net loss of gravel and drastically changing channel geomorphology. The construction of dams has eliminated the supply of coarse sediment to downstream river reaches. Gravel augmentation is a common strategy used in river restoration and improvement of salmon and steelhead spawning habitat. 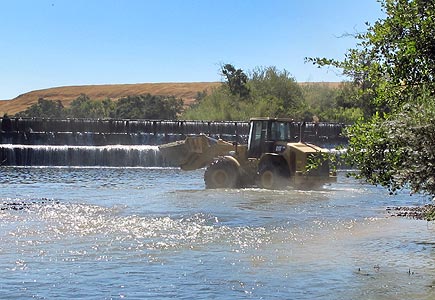 Gravel augmentation in the California Central Valley is typically implemented in the late summer before the chinook fall-run migration begins. It is best to use native gravel that is mined in a nearby off-channel, since gravel from a different basin may lack the mineral composition that salmonids have imprinted on and can delay spawning use. Gravel is graded to optimal sizes and washed to reduce turbidity when placed in stream. Gravel may be placed into riffles by a front-end loader, as was done last week in the Merced River below Crocker-Huffman Diversion Dam. However, if access is limited it may be placed by alternative means, including helicopter, cable skyline, conveyor belt systems or injection into water pumped through a large diameter hose. Gravel can also be replenished by passive gravel augmentation, where gravel is added from a truck down the bank onto the stream and it mobilizes and shifts around when flows increase.