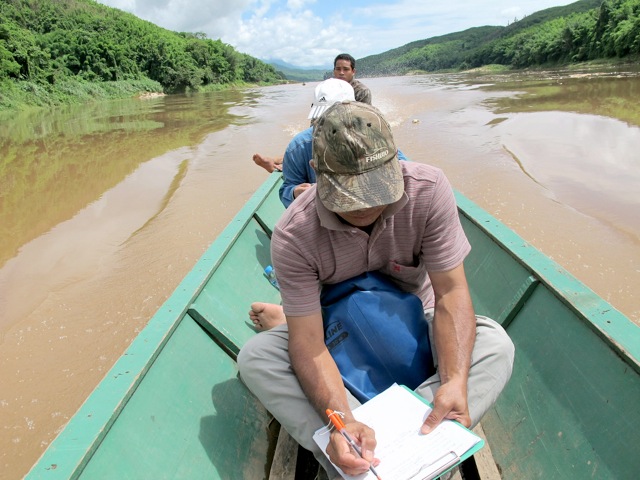 Wind and strong sunshine marked a recent day of fieldwork as we documented the boundaries of proposed fish safe havens on the Mekong River in Lao PDR. Staff from FISHBIO, IUCN, the National University of Laos and government offices worked together with local villagers to outline Fish Conservation Zones, or FCZs. These “no fishing zones” provide refuge and protected breeding areas to benefit future generations of fish. A few years ago, there were many threats to fish populations in this region, including people using electro-fishing, poison, and other illegal fishing gears. In addition, few regulations were established specifically for fish conservation. Recent surveys conducted by IUCN identified several Mekong biodiversity hotspots in Xayaburi and Luangprabang provinces; however, the demand for food to feed the increasing human population and exploitation using illegal fishing gears still put pressure on fish populations. FISHBIO and IUCN targeted two endangered fishes, Jullien’s Golden Carp (Probarbus jullieni) and the Thicklipped Barb (Probarbus labeamajor), for conservation efforts (see Living treasure).

FISHBIO and IUCN worked with local communities to help them plan ways to take care of their aquatic resources. We held many community discussions, listened to the villagers explain their fisheries problems and the main causes, and worked together to find solutions. The four communities we surveyed decided to enact year-round fishing closures to protect Probarbus fishes, and these protected areas will undoubtedly benefit other species of fish as well. As the result of village workshops and site surveys, four FCZs received community endorsement, fishing regulations were established, the GPS coordinates of FCZ boundaries were marked, and water depth measurements were taken in deep pools inside the FCZs (shown in the photo above). However, this effort still needs continued support to ensure that the FCZ regulations and management structure receive official approval from the Lao government. The photo above won our “Best of the Month” award for August. You can find this and more great photos in our extensive collection on Flickr.