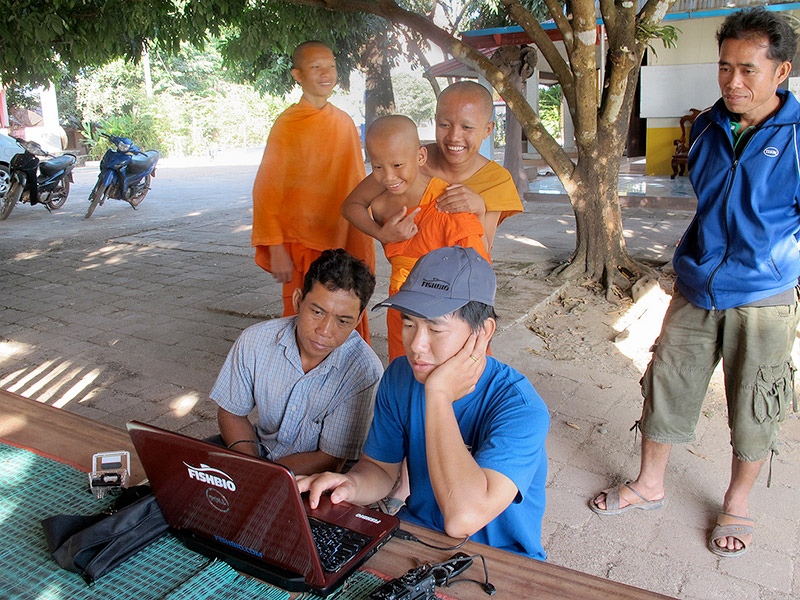 Mekong fishes have found an unexpected ally in the Lao village of Donexay: Buddhist monks. FISHBIO has based part of our international conservation program in villages like this one on the Nam Kading River, a major tributary of the Mekong (see Outdoor classroom, Lao women in fish research). We recently interviewed the villagers about their local fish conservation area, a stretch of river closed to fishing, and discovered that the idea came from the head monk of the village’s Buddhist temple. He had seen the success of fish conservation areas during visits to other villages, and thought the river’s wild fish populations near Donexay could also use some protection from heavy fishing.

The village has even set up a tourist attraction on the grounds of the temple—a platform for visitors to feed the fish in the conservation area. It works something like this: visitors pay a suggested donation of 5,000 Lao kip, or about 60 U.S. cents, for a bottle of fish food, which the monks will use it to keep the feed in stock. Then they head to a platform on a steep bank overlooking the river and pour the fish food down a long pipe. The feed slides into the water far below, which suddenly springs to life with splashing and thrashing. An occasional fish leaps into the air amid the tumultuous food fight, and shadowy shapes of larger fish emerge in the murky water slightly further from shore. Villagers hope this opportunity to see and feed the fish will help people understand and support the fishing closure.

Sinsamout, our Lao FISHBIO biologist, took some underwater video of the feeding frenzy in the conservation area. When he showed the footage to the head of the village, some of the younger monks crowded around to catch a glimpse of the silvery fish (top photo). The villagers said that the involvement of the temple has made people more likely to respect the rules of the no-fishing zone. In fact, many historic marine protected areas and other conservation zones originated in traditional communities from sacred sites where hunting or fishing were taboo (Colding and Folke 2001). And Buddhism and biodiversity might not be so unrelated after all. The head monk compared feeding the wild fish to offering rice as alms to the monks, a common practice in Lao PDR. Both acts should give people the same good feeling, he said—a feeling of giving back.