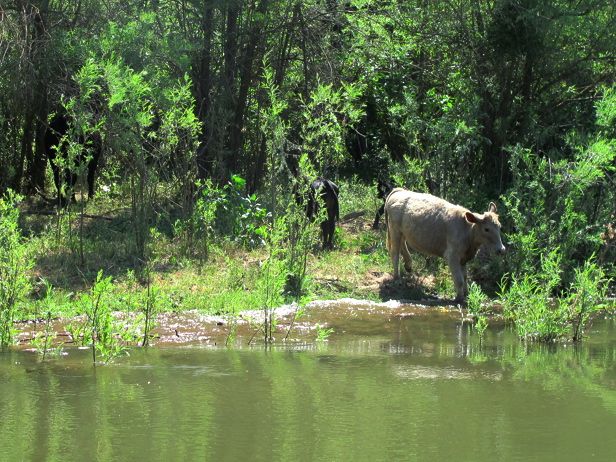 Although Americans enjoy heavy doses of both steak and seafood, the two are not necessarily compatible — at least when it comes to cattle grazing near salmon and steelhead streams. The negative impacts of cattle grazing on steelhead trout and other salmonids have been well documented. As livestock graze along riparian corridors, their heavy hooves erode and compact the soil, and also increase the width of streams by flattening riverbanks. Livestock are also associated with higher nutrient concentrations, higher water temperatures, lower macroinvertebrate abundance, and a decline in overhanging vegetation and shrub cover, all of which can be detrimental to salmon. Animals that graze in streams during salmon spawning season may trample redds or stir up silt that can fill the spaces between gravel and suffocate salmon eggs (a process called infilling). On the flip side, removing or excluding cattle from river areas can improve salmonid habitat and populations.

In recent years environmental groups have started national campaigns to eliminate the adverse effects of livestock on native species and their habitats on federal public lands. According to the Bureau of Land Management (BLM), livestock grazing on public land in 2012 totaled 8.9 million Animal Unit Months, which is the amount of forage needed to sustain one cow and her calf, one horse, or five sheep or goats for one month. A recent study by UC Davis researchers found that cattle grazing does not significantly impair water quality on national forest lands, suggesting that grazing and clean water can coexist (Roche et al. 2013). The study focused on nutrient levels and coliform bacteria; however, other issues of fish habitat degradation still remain. So it is in the best interest of salmonids if ranchers can follow best management practices and keep cattle out of streams.