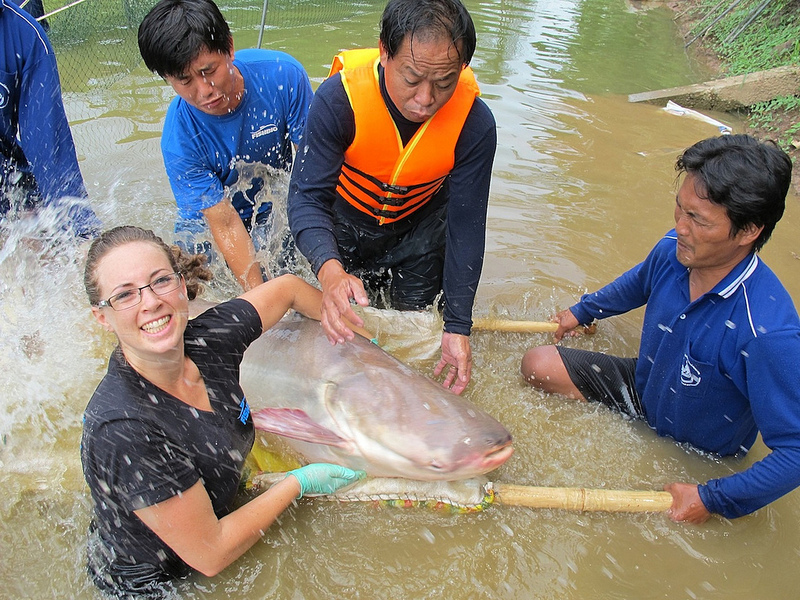 One of the biggest mysteries of the endangered Mekong giant catfish (Pangasianodon gigas) is where they migrate to spawn. In hopes of tracking the movements of these massive fish, FISHBIO and the World Wide Fund for Nature (WWF) are collaborating on a feasibility study to test tagging the catfish with Pop-up Satellite Archival Tags (PSATs). WWF’s Greater Mekong Program is curious whether this telemetry technology could be used to investigate giant catfish migration patterns and key habitat use. Mekong giant catfish are believed to be the world’s largest freshwater fish and are considered critically endangered by the IUCN Red List. They are known to migrate, and researchers believe they travel from Cambodia up the Mekong River to Laos and Thailand; however, their exact migration patterns are unknown. PSAT technology has been successfully employed to track large fish in the open ocean (such as tuna, billfish, and sharks), but it has rarely been used in the more confined habitat of rivers. The goal of this pilot study is to first assess the effectiveness of the technology and tagging method on hatchery-raised Mekong giant catfish in an enclosed reservoir. If we find that the tags efficiently deploy and record accurate information location, and that the fish maintain good health after tagging, then we may be able to apply this telemetry method to track giant catfish in the wild.

The pilot project is being conducted at the Nongkhai Inland Fisheries Research and Development Center, which is a Thai government-run center just across the Mekong River from Vientiane, Laos, in the Srichiangmai District of Thailand. The goal of this hatchery is to raise threatened fish species for conservation purposes and provide technical support to members of the local community engaged in aquaculture. The hatchery fish selected for tagging were bred from wild parents about 18 years ago. As Mekong giant catfish go, they were ‘mid-size,’ between 37-38 kg (81-84 lbs.) in weight and 134-143 cm (4.4-4.7 ft.) in length (see Big-boned). However, the fish were large enough that we could not move them in and out of the reservoir — so we brought the tagging station into the water. We maneuvered a large sling beneath the body of each fish for tagging and placed its head under a hood. Once inside the sling with their eyes covered and their gills and mouth fully submerged in the water, the fish remained passive throughout the tagging.

We attached two PSATs manufactured by Desert Star Systems® to two different catfish slightly below the base of the dorsal fin using the “through-back method.” This is similar to the method FISHBIO has used to apply tags to adult fishes in California (see Fish tracking with acoustic telemetry). We inserted a secondary, loose loop that holds the large tag flat against the back of the fish to keep it from snagging on plants or branches. The tags are programmed to self-release after a period of four months, at which point they will ‘pop up’ to the water surface and begin transmitting movement data to ARGOS satellites. In October, FISHBIO and WWF will return to the research center to search the reservoir to retrieve the deployed, floating tags and to examine the health of the tagged fish. We appreciate the opportunity to work with WWF and are excited to see what comes of this innovative project.