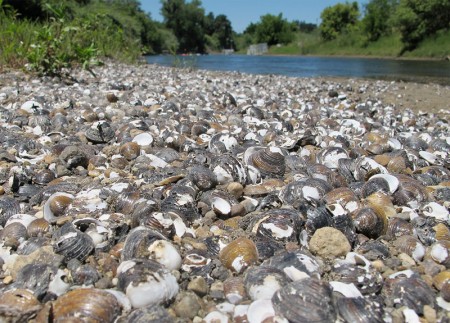 As flows receded in a Central Valley river, these Asian clams (Corbicula fluminea) became exposed along this gravel bar and were left to bake in the sun. The Asian clam is one of the most widespread non-native aquatic bivalve mollusks (e.g., “mussels” or “clams”) in North America. Non-native mollusks get a lot of attention because of there alien status, but native mollusks are largely underappreciated. In fact, North America has the greatest diversity of freshwater mussels in the world (approximately 290 species), but 72% are listed as recently extinct, endangered, threatened, or of special concern (Williams et al). Mussels are commonly considered biological monitors of water quality since they are sensitive to pollutants in rivers and lakes.

Perhaps the most interesting characteristic of freshwater mussels is their reliance on fish to complete their life-cycle. When adult mussels reproduce, the males release sperm into the water column and the females draw the sperm into their shell cavities to fertilize their eggs. The fertilized eggs develop into larvae, called glochidia, and then 75,000 to 3,000,000 glochidia per female are released into the water column. Once released, glochidia must attach to the gills or fins of an appropriate fish host to complete their metamorphosis into the juvenile stage. After anywhere between 1 to 25 weeks the juvenile mussel detaches from its host and falls to the substrate to complete its development into a sedentary, but free-living adult. Some mussel species may successfully use a variety of fish species, including salmonids, but the majority are thought to be host-specific. Without the right host fish mussels can’t complete their life cycle, therefore, they are dependent on the conservation of the host fish.