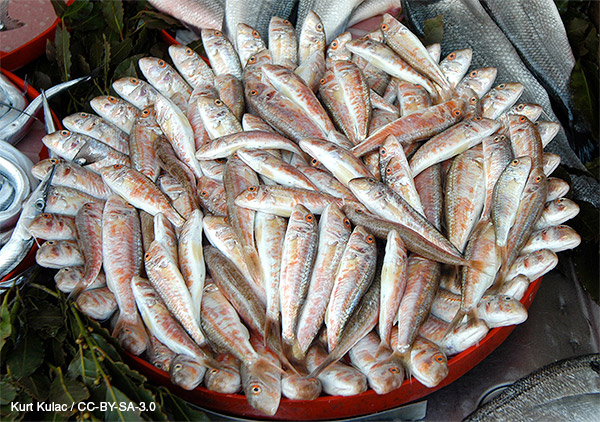 As global temperatures creep higher on land and at sea, animals generally face two options to cope with changing conditions: adapt or move. Land-based species may climb to higher elevations, while marine species may seek out deeper waters. And in both environments, species are generally shifting their ranges polewards to cooler latitudes, away from the tropical equator (Sunday et al. 2012). Already, warm-water fisheries species like red mullet (Mullus barbatus, shown above) have advanced to the waters of the United Kingdom, an area where they were once rare (Cheung et al. 2012). Researchers from the University of British Columbia and the University of Tasmania wanted to see whether this trend in shifting species could be detected among fisheries at a global level. In the May issue of Nature, they published a paper showing that the signs of this poleward shift are evident in fisheries catches around the world, revealing a redistribution of fish from tropical to temperate areas (Cheung et al. 2013). Such findings could have serious implications for the food security of tropical countries.

Ocean temperatures affect the water’s oxygen levels, and these two factors in turn affect a fish’s physiology, growth, and reproduction. Each fish species therefore favors a particular range of temperatures that it is best adapted to. The researchers calculated the average temperature “preference” for 990 harvested species from around the world ­– a higher average temperature would indicate a more tropical species. They then used these averages to calculate a global mean temperature of the world’s fisheries catch, which was weighted by the annual catch of each species. The team reported that the global mean temperature of fisheries catches has increased at a rate of 0.19 °C per decade since 1970, indicating an influx of warm-water species into traditionally temperate fisheries. The largest shifts in “mean temperature of the catch” (signifying the largest increases in warm-water fishes) occurred in the northeast Pacific Ocean (0.48 °C per decade) and the northeast Atlantic Ocean (0.49 °C per decade). The scientists also found these fish assemblage shifts are significantly related to the rate of sea surface temperature increases.

Though seemingly subtle, such shuffling of fish assemblages to follow shifting temperatures could have wide-reaching effects. The “tropicalization” of global fisheries described in this paper is a unidirectional shift of species ranges towards the poles, meaning tropical areas will experience a net loss of fish. This could threaten the food security of people in tropical coastal communities, and developing countries in the tropics already tend to be the most socioeconomically vulnerable to climate change (Allison et al. 2009). The study authors stress that such effects of climate change should inform fisheries management and adaptation plans for the most affected countries. Their paper paints a picture of a fishing landscape that has already begun to change as oceans warm, tipping the balance in favor of temperate countries, and leaving tropical countries with the most to lose.