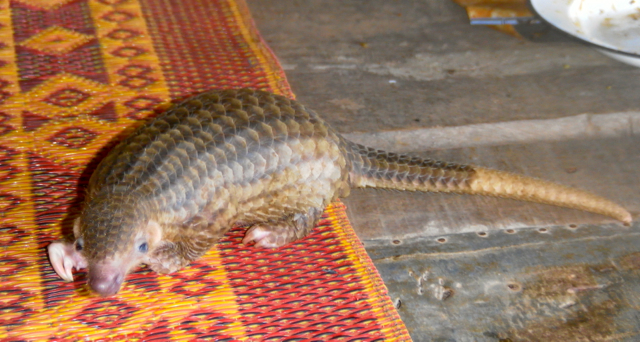 Fish are vital to the food security of Southeast Asia’s Mekong Basin (see Fish on a rope, Fish-kabob) – however, food comes in many forms for the people of the region (see Ant snacks, Frog to go). The Mekong Basin is undergoing rapid change, and with it come concerns over the impacts on fisheries and related food security. With increased development, there is also growing hunting pressure on rare terrestrial wildlife that has historically been part of the local diet (Sodhi et al. 2004). A research team from the National University of Laos recently described a new species of flying squirrel, the Laotian giant flying squirrel (Biswamoyopterus laoensis), that they discovered not among the trees of the forest, but for sale in a bushmeat market.

FISHBIO recently presented a talk on the relationship between Mekong fisheries and wildlife consumption at the International Congress for Conservation Biology in Baltimore, Maryland. We described results from our community-based participatory research program on fisheries and sustainable livelihoods in Laos. Teams from four villages were trained to monitor fishing catch, fish sales at local markets, and household food consumption—including the consumption of wildlife. Despite targeted conservation efforts such as outreach and establishment of National Protected Areas, our surveys showed that terrestrial wildlife of concern continues to be present in local diets, albeit at a much lower level than fishes. Our team documented consumption of birds, reptiles, amphibians, and rodents. Additionally, some rare and endangered wildlife species end up in markets, including pangolins (top photo), loris, and marbled cats. A low level of wildlife consumption remained relatively consistent throughout the year, with no major seasonal patterns. However, if environmental changes or development were to impact the abundance of fish populations in the region, it seems logical that terrestrial wildlife may increasingly take their place on dinner plates. Thus, in remote areas of the Mekong Basin, the conservation of fishes and rare terrestrial animals are inherently linked.