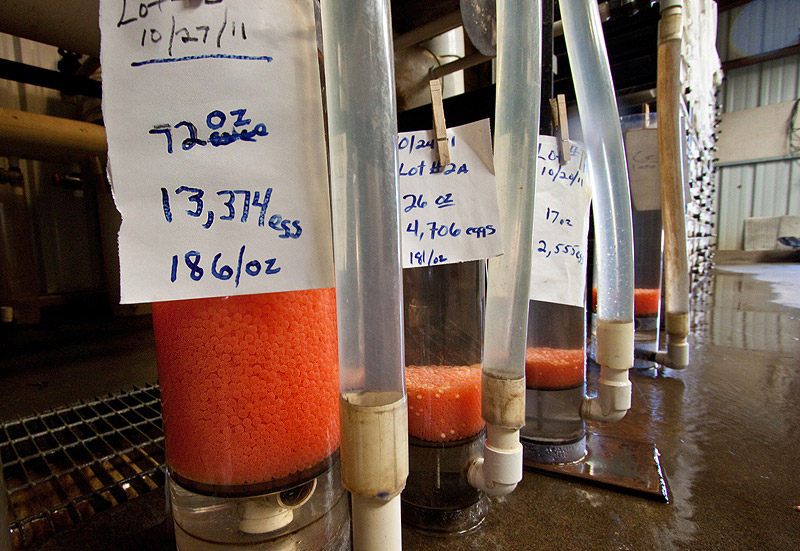 Fish hatcheries throughout the Pacific Coast of North America are beginning to spawn fall-run Chinook salmon and many allow the public to witness the process. Here we provide a brief overview of the procedure along with photos from recent visits to some California hatcheries.

When hatchery fish return to their natal rivers they are typically diverted by a weir or fish ladder into hatchery holding pens, where they wait until hatchery personnel are ready to harvest their gametes (i.e., eggs and sperm). At the Merced River Hatchery, a worker sorts through the holding fish and herds them into a fish elevator where they are raised into the egg-taking facilities. Most Pacific salmon die naturally after spawning, but in the hatchery setting adult fish are killed humanely prior to the artificial spawning process. The females are sliced open, the eggs are removed and milt (sperm) from a male is squeezed into the bucket of eggs. The fertilized eggs are disinfected, then placed into incubation trays where a continuous flow of well oxygenated water will move past the eggs while the eggs develop into alevin and then free-swimming fry. Once the fry are actively feeding they are transferred to rearing tanks where they will be raised to smolts, at which point they are released to make their journey to the ocean.