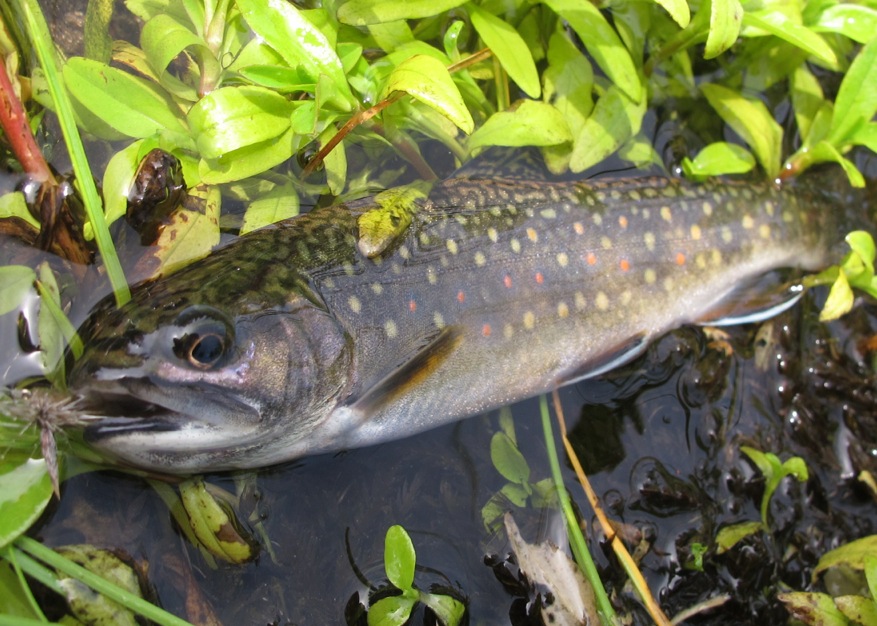 Can skewing sex ratios of invasive fish save salmonids? Last year we wrote a Fish Report about a predator-control method being developed by Idaho’s Department of Fish and Game to reduce non-native brook trout populations. It entails raising male hatchery fish that have two Y chromosomes, rather than the typical “XY” set. These males are referred to as “YY” males or “super-males.” YY males are bred at hatcheries from two XY males, one of which produces eggs after being exposed to the hormone estradiol. This breeding technique was first developed in the early 1980s (Hunter et al. 1982) and since then has been used by hatcheries to boost fish growth, but it wasn’t until 2006 that scientists, realized it could potentially replace the time-consuming and sometimes ineffective techniques that managers use to control unwanted fish populations, such as electroshocking and poisoning (Gutierrez and Teem 2006). Now, for the first time, YY male fish have been released into the wild and a recent publication by Kennedy et al. (2018) shows that this can be a successful and cost-effective method of predator suppression.

When YY males are released into the wild to breed with wild females of their species, the resulting offspring are all normal males. As long as no more females are introduced, the wild population will soon die off as the males age and sex-ratios are skewed so that no more offspring are produced. Previous simulations showed that it may take up to 10 years to eradicate a wild population by stocking YY-males (Schill et al. 2017). Experts were also unsure whether YY males could survive well enough in the wild to find mates; however, this newest field study shows that YY males have only slightly reduced survival and reproductive success compared to wild fish. YY male survival can be increased by releasing them at a larger size and removing some of the wild population through electrofishing. Mores studies in the wild are needed before the logistics of things like stocking rate, suppression strategies, and YY male survival can be nailed down and the technique can be applied to trout removal projects elsewhere.

Brook trout, and other species of trout, have been introduced to waterways across the country as game fish, but they prey on the larvae of endangered fish and amphibian species that evolved in high-mountain streams without such predators. This new technique could be an impactful tool for managers dealing with non-native trout. But it may be some time before YY males are widely released into the wild or used to control other invasive species, such as black bass. It would require the release of three YY males per year for several decades to eventually control a population of 100 non-native individuals (Gutierrez 2009), so the method may be of limited use in large or highly-infested waterways. It is also unknown at this time what the side-effects might be of introducing hundreds of YY-males into the wild in terms of potential impacts on native species. But researchers keep forging ahead, finding creative applications such as this, that might solve this major fisheries management issue before our native species are edged out by invasives.