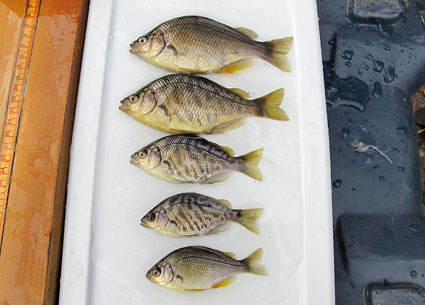 We have posted about tuleperch (Hysterocarpus traskii) before, Tuleperch Gone Wild, but we thought this photo was a good example of the different color phases that occur. These tuleperch were all captured recently in the same location in the Stanislaus River demonstrating the phenotypic diversity. The phenotype of a fish is the observable physical trait (i.e. color, shape, etc.). The fish on the top and the bottom of the photo are examples of unbarred and the three middle fish are examples of narrow-barred fish. Interestingly, the unbarred phenotype only occurs in populations of the Sacramento and San Joaquin subspecies (H.t. traskii), where as broad-barred fish are only common among the Clear Lake subspecies (H.t. pomo) (Moyle 2002).