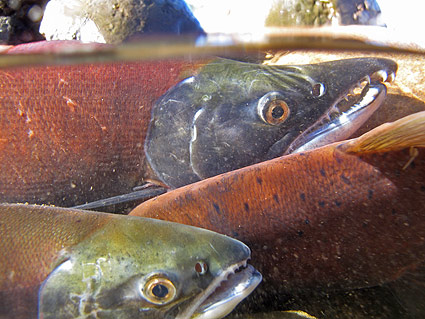 Kokanee are a non-anadromous form of the sockeye salmon. In most locations both kokanee and sockeye share the same spawning rivers and develop a similar characteristic breeding coloration of a red body with a green head. In both kokanee and sockeye, the red color develops when carotenoid pigments, obtained through the fish’s diet, are transported to the skin. The carotenoids are pigments created by plants and are relatively more abundant in the marine food web than in the freshwater system. Interestingly, sockeye salmon who residualize (do not follow their peers out to the ocean) and stay in the freshwater with their kokanee counterparts turn all green and do not have red bodies. These residual sockeyes are thought to have given rise to the freshwater kokanee. The question is, if residual sockeyes do not produce the red coloration, then how did the red breeding color reemerge in kokanees? They have similar diets, the source of the carotenoids. It turns out that despite the low levels of carotenoids available in the freshwater, kokanee salmon have adapted to be about three times more efficient at sequestering the pigments compared to their marine counterparts (Craig and Foote 2001). This adaptation has allowed them to develop the same prized red skintone as the sockeye salmon. Although gentlemen prefer blondes, as it turns out female kokanee prefer reds. See our video of sockeye attempting to spawn in the Stanislaus River.