There are numerous advantages to using a fish counting weir instead of traditional carcass surveys to enumerate spawning migrations of anadromous fish. A weir (aka Alaskan weir, portable resistance board weir) installed downstream of a spawning reach can passively detect every fish migrating upriver, including fishes like steelhead, which do not die after spawning and are not counted in carcass surveys. Data collected by the weir can be used to address hypotheses regarding fish migration behavior and how environmental factors affect migration. For example, using weir data we observe when fish move up and downstream (time of day, month, year), as well as the sex, size class (grilse/adult), origin (natural/hatchery), and condition of passing fish. Weir data also allows us to examine how migration timing and behavior is affected by environmental variables such as river flow, temperature, and dissolved oxygen. 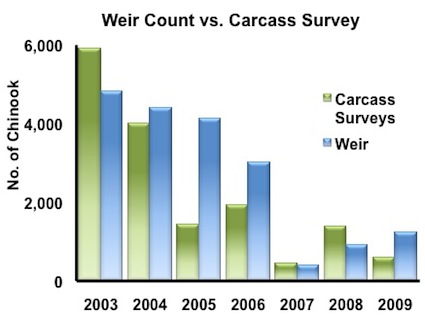 The California Department of Fish and Game (CDFG) has used carcass surveys to estimate fall-run Chinook escapement for several decades on the Stanislaus River. During the past 7 years we have also been monitoring Chinook passage at the weir utilizing infrared technology (Vaki Riverwatcher), and the graph above demonstrates that carcass survey mark-recapture estimates are dramatically different than weir counts. The magnitude of the difference is highly variable among years, possibly due to changes in the timing or extent of carcass surveys form year to year. The carcass surveys are typically conducted weekly from October through the end of December depending on fish abundance and river flow conditions. The weir typically continues to count Chinook passage after December; however, this graph only shows weir counts through December 31 for consistency with carcass survey sampling periods. 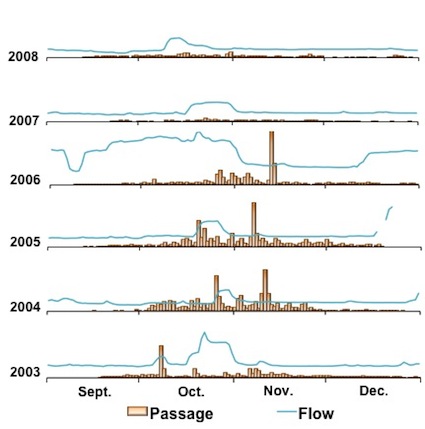 In addition to providing more precise estimates of Chinook escapement, a fish counting weir operates at a fixed point each year and provides a consistent assessment of the response of fish passage to changes in the environment. In the Stanislaus River we have found that the bulk of migration typically occurs in late October and early November. To date, we have not observed any obvious correlation between fish migration timing and flow conditions. 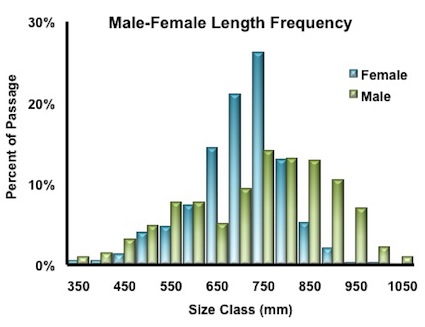 Using photos and infrared images generated as fish pass through the weir, technicians can often identify the sex of each passing salmonid. These data reveal that male Chinook salmon that pass the weir exhibit a broader range of size classes and are generally larger than returning females. This length frequency information is the same data you would get from a typical carcass survey, but in this case you can be confident you’ve measured each passing fish . . . and you didn’t have to fight off a hungry bear or raccoon to do it!