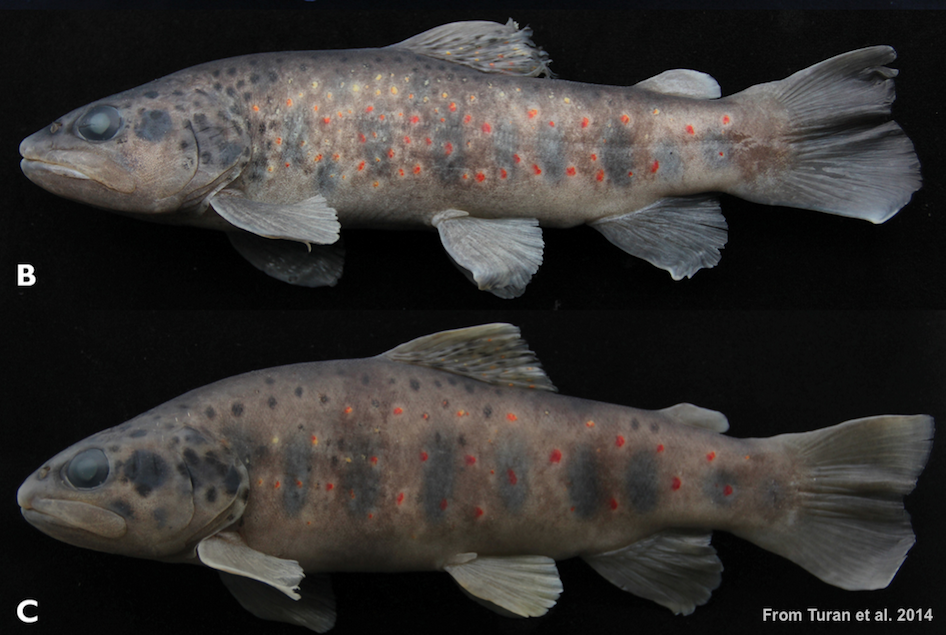 A new endemic trout species, Salmo kottelati, was recently discovered in the Alakir Stream in Turkey. This species is part of the Salmonidae family, which includes Pacific and Atlantic salmon and trout. Turan et al. (2014) described the species as being unique from other Salmo species according to a combination of various morphometric measurements (such as the length and depth of the head and fins, diameter of the eye, and size of the mouth), and meristic differences, or counts of certain body features (such as number of scale rows, number of lateral line scales, and number of gill rakers). Some of the distinct differences between S. kottelati and other Salmo species include that S. kottelati has fewer parr marks on its flank than other species, lacks the dark bands observed in other species, and displays red and black spots in individuals of all sizes. The authors describe the fish’s color as “greenish to silvery.” The fish is currently only known from the single stream where it was collected, which drains into the Mediterranean Sea in southern Turkey. The species was named after Maurice Kottelat, a Swiss ichthyologist and taxonomic expert who has conducted important research throughout Europe and Asia. At FISHBIO, we make particular use of Kottelat’s Fishes of Laos and Freshwater fishes of Northern Vietnam for our Mekong work.

The family Salmonidae is comprised of three subfamilies: Coregoninae (e.g., whitefish), Thymallinae (e.g., graylings), and Salmoninae (e.g., salmon, trout, and char). This family dates back to the Eocene era (approximately 56 to 34 million years ago), and is comprised of many extant species, including several we work with today. Surprisingly, many new species are discovered throughout the world each year, consisting mostly of invertebrates. The United Nations reports that approximately 150 new marine fish species are identified yearly, and new freshwater fish species also continue to be discovered in many places including the Amazon Basin, India, and Europe.