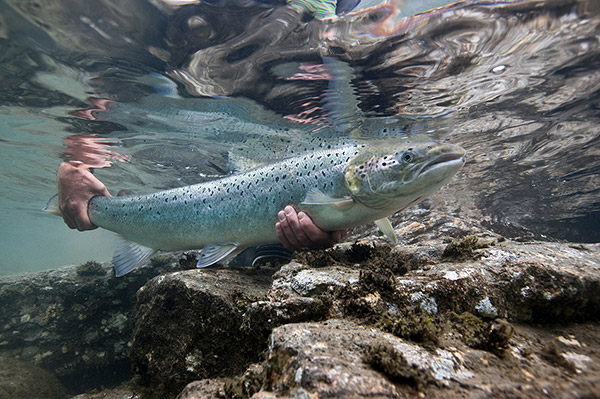 As the population continues to grow, we continue to rely on farming as a necessary method for creating enough food to supply much of the world. Most of the things that are consumed in America including beef, chicken, and garden salads were mass-produced on a farm. In order to keep up with growing demand, it was only a matter of time before we learned to farm salmon in the sea. However, the idea of aquaculture was developed long ago and evidence suggests that aboriginals in Australia were able to harvest eels through the use of aquaculture in 6,000 BC. The use of floating cages for salmon farming originated in Norway in the late 1960’s and is now also used in Chile, Canada, the UK, Faroe Islands, Russia and Tasmania. Due to their ability to survive in net pens, approximately 90% of the salmon farmed in the aquaculture industry are Atlantic salmon and consist of more than 50% of all the salmon on the global market.

As the name suggests, North American Atlantic salmon are native to the Atlantic Ocean and historically ranged from as far south as Connecticut and extend all the way up to Northern Quebec. One distinct biological characteristic that separates Atlantic salmon from Pacific salmon is the ability to reproduce more than once. Pacific salmon spawn once in their lifetime, but Atlantic salmon, much like steelhead, are iteroparous and can return to the ocean after spawning. Despite this unique trait, Atlantic salmon populations continue to be low and in 2000 the National Oceanic and Atmospheric Administration and the United States Fish and Wildlife Service listed the species as endangered under the Endangered Species Act.

The use of aquaculture in the salmon market has helped limit the impact of commercial fishing while keeping up with increasing demand. From 1989 to 2004, consumption of wild caught salmon in North America has remained steady at about 50,000 metric tons. During the same 25 years, consumption of farm-raised salmon has increased from about 20,000 metric tons to as much as 200,000 metric tons. As populations continue to increase the demand will continue to rise and, instead of getting fresh salmon only a couple of months out of the year while it’s in season, the use of aquaculture has made it possible enjoy fresh filets year round.

As with anything, there are concerns and issues that arise when trying to mass-produce something in a localized area. Most fish farms use pellets for feed that are made from terrestrial crops and contain traces of pesticides and herbicides. Another issue with mass-production is that fish become more susceptible to transmitting diseases in close corridors and, in order to prevent loss of the entire school, they are constantly receiving doses of antibiotics that fend off disease. There is also the concern that unnatural strays of fish could escape the confines of the cages and begin competing for habitat and destroying the genetics of the natural populations. There is no doubt that farm raised salmon can help alleviate the pressure of commercial fishing on wild stocks, but precautions must be taken when trying to mass-produce salmon.