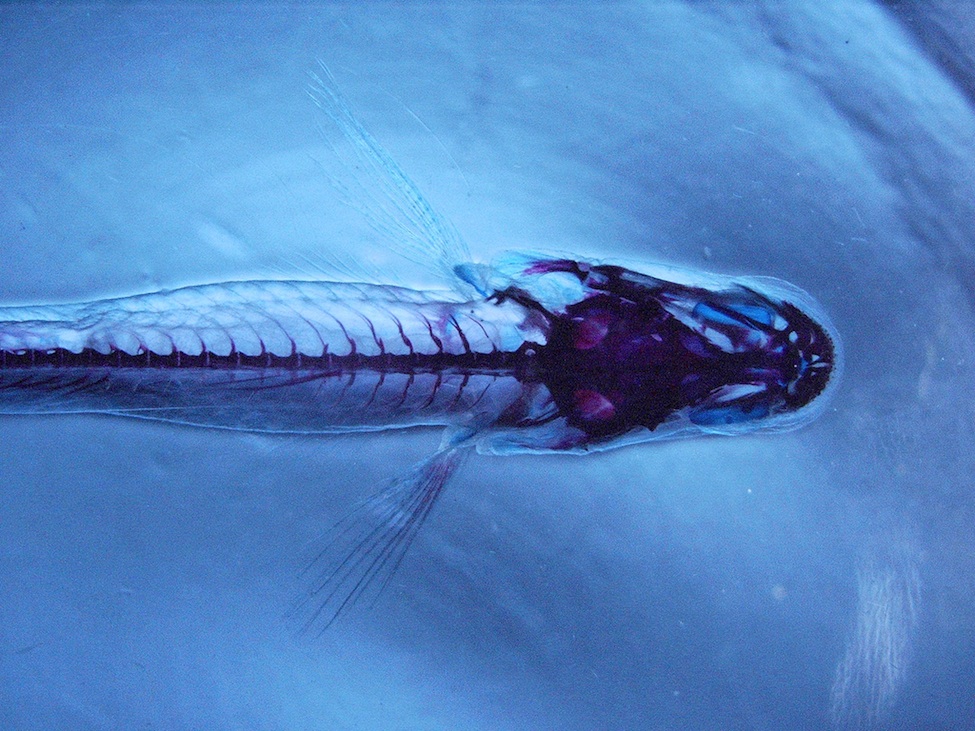 Scientists have discovered that bony fish have one more thing in common with humans than previously thought: they can get arthritis too. It was commonly assumed that bony fishes lacked the same kind of lubricated joints, called synovial joints, that humans have, including our knuckles, knees, and hips. These joints allow for lots of movement, thanks to a fluid-filled membrane between layers of cartilage, but are also highly susceptible to arthritis when the membrane or cartilage deteriorates, or gets inflamed. Scientists previously believed this kind of lubricated joint first evolved when animals made the transition to life on land, and needed to support their weight without the help of water. However, when researchers used clearing and staining (the method depicted in the tidewater goby photo above), to look at the bones of zebrafish, they discovered joints in the fish’s jaw and fins that looked like synovial joints – which implied that, like humans, fish could get creaky as they age (Askary et al. 2016).

As further evidence, the researchers discovered the cells of these zebrafish joints produce the same molecular lubricant, a protein called lubricin, found in mammals that keeps our synovial joints well oiled. When the scientists removed the lubricin gene from zebrafish, the fish developed early-onset arthritis in their jaws and fins. To see how widespread this trait was, the scientists also examined distantly related fishes, the three-spined stickleback and the ray-finned spotted gar, and also found evidence of synovial joints in the jaws of both species. The team believes these lubricated joints help fish counter water resistance when moving their mouths or fins. The results indicate that lubricated joints evolved earlier than previously thought: the common ancestor shared by all bony vertebrates, fish and mammals alike, must have possessed and passed down this trait. Thanks to this work, the zebrafish, which is already used to study many human diseases, can now help scientists understand how arthritis progresses, and may help facilitate its treatment.