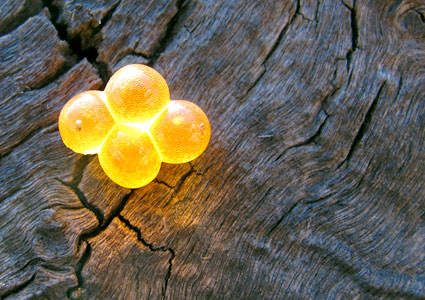 October is not just a time for Halloween and trick-or-treating, but also a time for the gravel beds of our rivers to become home to billions of salmon eggs. Glowing orange like a jack-o-lantern, the single cell of a salmon egg will develop into millions of specialized cells making up the next generation of salmon. Pacific salmon are actively spawning in watersheds throughout the Pacific Northwest, laying between 1,500 and 12,000 eggs, depending on the species. Fertilization occurs when one spermatozoan from the milt of a male enters the micropyle (a narrow canal in the capsule) of an egg. The incubation period for development of Pacific salmon eggs ranges from about 47 to 65 days at a constant temperature of 10C (50F). Egg development can be described in three phases: cleavage, epiboly, and organogenesis. During the cleavage phase cells are rapidly dividing every few hours until the egg becomes a blastula (128 cells). The blastula will then begin forming tissue (epiboly) until the embryo is formed and the yolk plug is closed. The embryo continues to develop, forming the brain, heart and fins during the final phase (organogenesis) before hatching. Once the fish hatches it will continue developing as an alevin. The alevin (sac fry) has an external yolk sac attached to its abdomen, which provides nourishment as the hatchling develops into a fry. The alevin will remain in the gravel until the yolk sac is absorbed and the abdomen becomes “buttoned up.” The salmon will emerge from the gravel as fry able to freely feed on plankton.

While most American children would be disgusted to find salmon eggs in their trick-or-treat baskets, the unfertilized eggs (“Ikura”) are considered a delicacy in Japan.