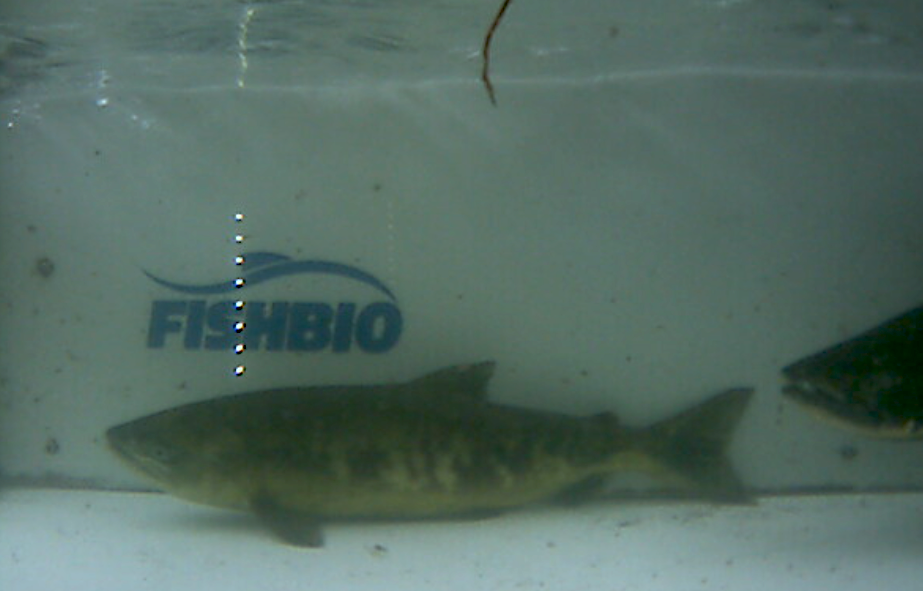 At FISHBIO, we use our fish counting weirs mostly to track the upstream migration of Chinook salmon. However, from time to time we record the passage of other species – even beavers. While reviewing video footage of recorded passages for the 2017-2018 season, we recently identified a chum salmon, Oncorhynchus keta, migrating up the Tuolumne River. Chum salmon are the second most abundant of the Pacific salmon species, after pink salmon, and can be found in many streams from Oregon to Korea. In California, however, they are very rare, and occasional documentation is typically restricted to the Smith and Klamath river basins. The last time we saw a chum salmon in a  San Joaquin tributary was in 2009 (photo below), and another was detected during a relocation effort on the San Joaquin River in 2013 (Root et al. 2015). The chum salmon occasionally observed in the Central Valley are strays from northern populations, as no spawning of chum salmon has been recorded here for several decades (Moyle 2002). 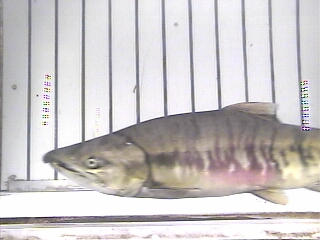 Chum salmon are also known as “dog salmon.” While these fish are used as food for sled dogs in Northern latitudes, the nickname actually comes from the characteristic canine teeth that they develop during spawning season. For human consumption, chum salmon are marketed under the more appealing names of “keta salmon,” “calico salmon,” or “silverbrite salmon.” During the ocean phase of their life cycle, these fish truly have a “silverbrite” appearance that sometimes makes it difficult to distinguish from other salmon species to the untrained eye. Once they enter freshwater, however, they develop maroon or black vertical bars, which clearly reveal their identity and make them stand out from the Chinook salmon in our weir records. So far, it seems as though the final journey in the life of this Tuolumne River chum salmon may be a lonely one, since it cannot reach its goal of successful reproduction without a mate. But its passage is a good reminder for keeping our video reviewers on their toes!