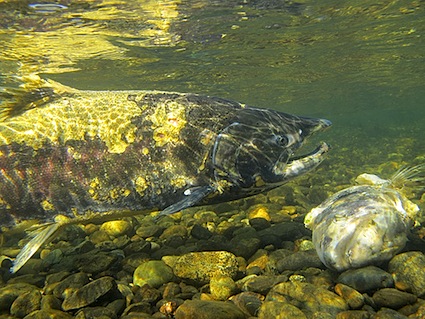 When talking with the general public, we’re continuously surprised at how little people know about Chinook salmon (Oncorhynchus tshawytscha) life history. As the most widespread salmon species along the West Coast (from Kamchatka Peninsula in Russia to the Central Valley of California) they should be familiar to local residents, but that is often not the case (Augerot et al. 2005).

Wild chinook (aka “King”) salmon hatch in gravel beds in western rivers in late winter-early spring and rapidly grow while feeding on zooplankton and other invertebrates. After several weeks (ocean-type) or a year (Stream-type) when they are physiologically ready (smolted), they migrate downstream until they reach the Pacific ocean. In the ocean chinook will form schools and spend 2 to 5 years feeding on amphipods, squid and small fish like herring and anchovy (Healey 1991). Fish that mature and survive the perils of the ocean return to their natal stream at various times of year depending on their race (spring-run, fall-run, winter-run).

Chinook, as with all salmon species, have an exceptional ability to home in on their stream of origin to spawn using various navigational technique. The most well known, is their long-term memory of the odors and mineral composition of the stream or even riffle in which they were hatched. At maturity they will cease feeding in the ocean and migrate hundreds of miles using only stored body fat for energy. Spawning occurs predominantly in fall, with some exceptions. Once they find suitable habitat, females will dig a nest (redd) in the gravel while the males compete to pass on their genes. Eggs are deposited, fertilized and buried within the gravel multiple times over several days. Chinook salmon are semelparous (die after spawning only once). Post spawned females will guard their redd up to the time they have exhausted all their energy and die. It is not known how long males live after spawning since they tend to move around and are not faithful to a single redd. After a few weeks of developing a new generation of chinook will emerge and begin the cycle all over again.