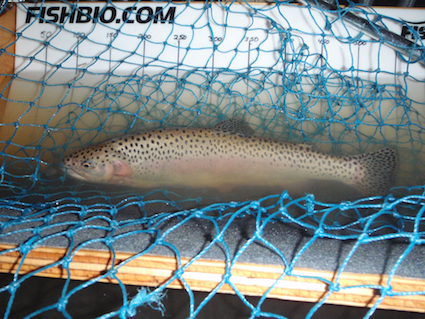 This may seem like a simple question, but there is more than meets the eye. At first glance the fish in the photo above appears to be a resident rainbow trout. However, the fish was caught in January in an upstream trap. The fish is about 395mm total length (15.6 in) and since the adipose fin was not clipped it appears to be a wild spawned male.

Most of us have been taught that there are two types of rainbow trout (Oncorhynchus mykiss ), the resident trouts that remain in streams their whole lives, and the steelhead that turn silvery and migrate out to the ocean for a few years before returning to spawn (anadromous). Using that simplified logic a larger fish moving upstream, such as the one pictured, would be an anadromous steelhead. However researchers now recognize that these are two extremes in a range of options (and color combinations). There are potamodromous fish that migrate within fresh water only, and estuarine fish that migrate out to the estuaries and back without entering the saltwater. To add to the complexity, recent studies have shown conclusively that in some populations of O. mykiss, ‘resident’ females can produce steelhead offspring and steelhead females can produce ‘resident’ offspring.

While the flexible reproductive strategy of the rainbow trout may make management of the species much more difficult and complex, it may also be their saving grace, since this strategy allows for persistence in times of unstable environmental conditions.