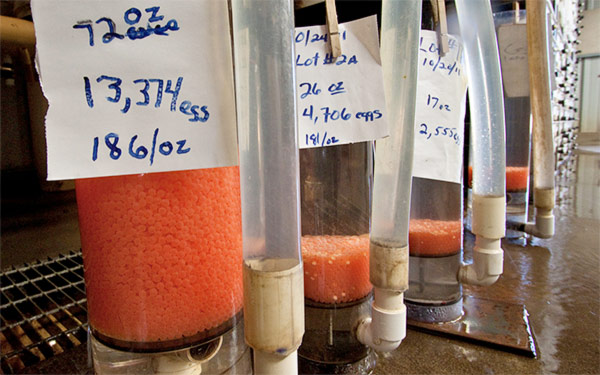 Throughout the history of California, dams have been built for a variety of reasons including hydropower, flood protection, and irrigation, but the construction of all these dams has been a blow to the state’s salmon. It is estimated that dams have eliminated 48% of the salmon habitat (Yoshiyama et al. 1996), and in many cases fish hatcheries were constructed to mitigate for this loss. The history of hatcheries in California goes back well over a century. The first publicly owned fish hatcheries were established in 1870, only 20 years after California became a state. Construction of the Coleman National Fish Hatchery began in 1942 on Battle Creek and was the first hatchery to mitigate the loss of anadromous fish habitat on the Sacramento River. Over the next 50 years the state opened four more hatcheries along Central Valley tributaries: the Feather, American, Mokelumne and Merced Rivers. Today California hatcheries produce more than 32 million fall-run Chinook salmon annually.

For many years there has been rising concern for how hatchery salmon affect the natural spawning populations. Rather than focusing on preserving the naturally spawning individuals of a vulnerable species, hatcheries are often focused on producing a certain number of salmon to meet mitigation requirements. In 2000, the U.S. Congress initiated a review process that assessed the hatchery programs in the Puget Sound and coastal Washington, and then in 2005 the Columbia River. The reviews proved to be successful in consolidating knowledge of hatchery operations and objectives, and recommending more refined hatchery practices. In 2010 Congress approved funds to form the California Hatchery Scientific Review Group (CA HSRG) to begin a similar review process for California. The goal of the CA HSRG is to evaluate the hatchery programs to ensure that they are being effectively managed and operated in a way that ensures that they meet one or both of their goals; (1) helping recover and conserve naturally spawning salmon and steelhead populations, and (2) supporting sustainable fisheries with little or no deleterious consequence to natural populations.

After nearly two years of evaluating hatcheries throughout California, the CA HSRG has submitted a report on their observations and suggested modifications to hatchery operations (HSRG, 2012). An example of one such recommended change is to move to 100% marking and tagging programs. In 2007, the Constant Fractional Marking (CFM) program was initiated and hatcheries began marking and tagging 25% of fall-run Chinook salmon production. With the CFM program, estimates of hatchery origin fish are calculated at the end of the year, but 100% marking would allow for real-time identification of all hatchery origin fish. Additionally, it has been well documented that trucking the hatchery fish to the San Francisco Bay has led to increased straying. If the hatcheries were to cease the trucking operations, then there would be less genetic mixing between basins. The review panel also concluded that the harvest rate cap (currently 70%) is higher than it should be given the current state of the salmon habitat, and the escapement target of 122,000 Sacramento River Fall Chinook adults set by the Pacific Fishery Management Council should be revised. The review addresses many concerns and offers ideas for solutions that could prove effective in recovering and maintaining a sustainable natural population. Now that the problems have been identified and some solutions have been presented, California Department of Fish and Game will begin this fall to look into implementing the recommendations.