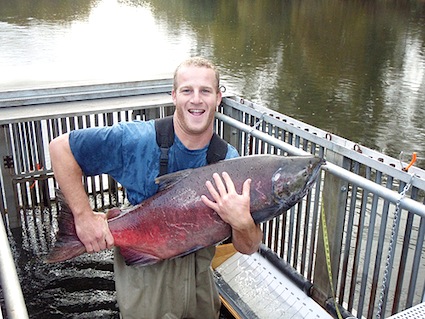 While humans seem to flock to warmer climates (i.e. snowbirds) as they age, it appears that salmon in the ocean do the opposite. In general we know much more about the habitat preferences of salmon in rivers and stream than in the open ocean. Most of what researchers know about where salmon go in the Pacific is based on fisheries bycatch. In the freshwater environment water temperature is one of the most important environmental factors that affect habitat use by salmonids, and often older fish are found in deeper or cooler waters. A recent study by a group of Japanese researchers found a similar trend while trawling just below the surface in the western North Pacific. Older and larger, sockeye, chum and pink salmon inhabit colder waters in comparison to smaller and younger fish of the same species. This kind of age-related habitat use is called an “ontogenetic shift”. The researchers hypothesized that the shift could be an adaptive behavior to maximize growth, since earlier research showed that optimum temperatures for growth in Oncorhynchus species decrease with increasing body size. Additionally, the study found significant differences in temperature distribution among species, with sockeye inhabiting coolest waters, and pink in the warmest.