The City of Oroville recently hosted the 19th Annual Salmon Festival on September 27-29 to celebrate the thousands of returning salmon in the Feather River. Many festival activities took place in the Salmon Court where FISHBIO had an informational booth set up and we were able to experience the growing cultural influence of the salmon festival first hand. Especially important to us was the ability to interact with fellow fish fans of all sizes. Thousands of attendees to the festival had a chance to tour the Feather River Fish Hatchery, participate in grilled and smoked salmon tasting, and enjoy a weekend full of live music, food, and fun.

Not to be overshadowed by the music, food, and vendors, the Chinook salmon being celebrated made their own splash. Many salmon making their way back from the Pacific Ocean could be seen from the downtown bridge in the Feather River moving towards the fish ladder at the Fish Barrier Dam in Oroville. The fish ladder not only serves as a way to direct fish into the hatchery, it is also a way to segregate two distinct salmon runs. The Feather River is home to both fall-run and spring-run Chinook salmon (see Challenges of spring-run Chinook salmon). The spring-run Chinook salmon begin arriving annually as early as March and enter the hatchery until the fish ladder is closed in early July. The ladder is re-opened in September when fall-run salmon typically reach the dam. This segregation allows the California Department of Fish and Wildlife to process the spring run and fall run separately in the hatchery, which can include counting, measuring, tagging, and spawning the fish. The Feather River is one of the only remaining rivers in California that contains spring-run salmon, which is considered a threatened species by the National Marine Fisheries Service. 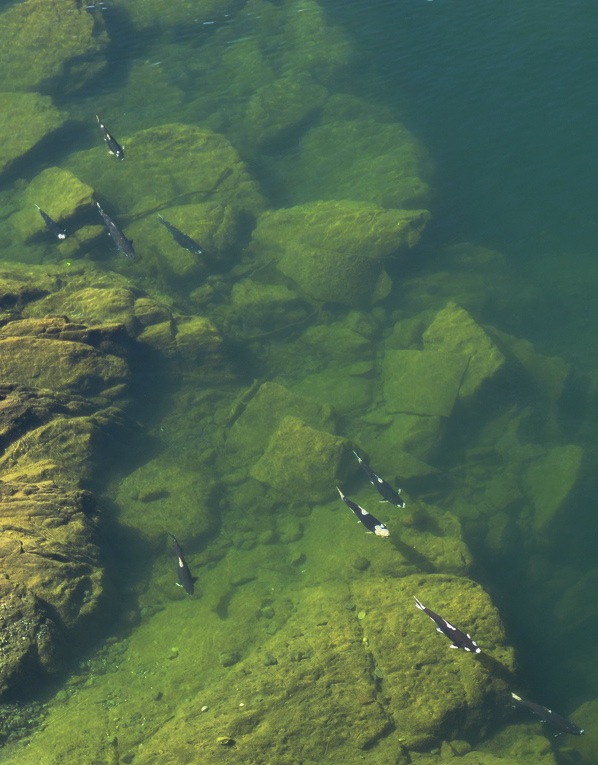