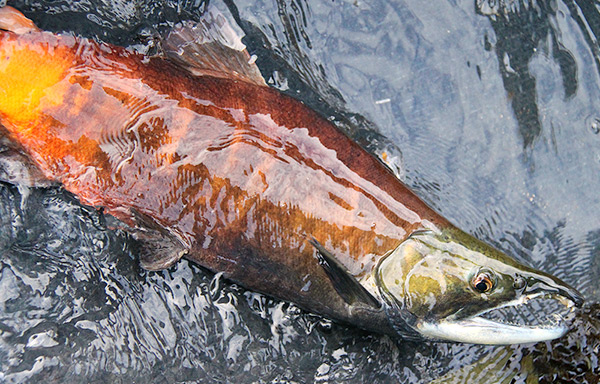 The epic migrations of salmon have long been a subject of mystery and amazement. What directs these animals’ journeys across great stretches of ocean, pulling them back to the very stream where they were born? Chemical cues help fish pinpoint their stream of origin (Johnsen and Hasler 2006), but what steers the salmon’s course when it is still thousands of kilometers away? A group of fisheries scientists recently offered the first empirical evidence that salmon navigate using the Earth’s magnetic field. The study’s findings, published in the journal Current Biology last month, suggest that salmon form an imprint of the magnetic field in their natal streams, and find their way back as adults via a route that matches the magnetic memory of their birthplace.

Scientists have hypothesized that migrating animals travel by the magnetic field (Lohmann 2008), but this is difficult to test directly. The authors of the new study devised a natural experiment using 56 years of fisheries records of sockeye salmon (Oncorhynchus nerka) returning to British Columbia’s Fraser River. Fish from the Fraser River typically migrate to Alaska’s Aleutian Islands, spend two years foraging, then embark on the long trek back to the river to spawn. Along the way, they encounter a major roadblock: Vancouver Island obstructs direct entrance to the Fraser River, forcing salmon to detour to the north or south. The scientists predicted that natural shifts in the Earth’s magnetic field from year to year would lead salmon to adjust their route accordingly, choosing the passage with a magnetic field more closely aligned with the magnetic field of the Fraser River two years previously. The team modeled variations in the Earth’s magnetic field based on its intensity and inclination, or the angle of intersection with the Earth’s surface. They matched this up with a long history of fisheries records that documented how many salmon travelled via the northern route each year, which lies solely in Canadian waters, or via the southern route, which is shared by Canadian and U.S. fisheries.

The scientists found that whether the fish turn right or left is far from an arbitrary decision: their selection largely depends on how closely the magnetic field at the route’s entryway resembles the magnetic field they experienced at birth. Sea surface temperature also played a big role: in warmer years, more fish followed the northern, cooler route. Results indicated that 68% of the variation in the salmon’s choice of direction was explained by variation in the magnetic field, sea surface temperature, or some combination of the two. This study suggests that salmon may follow a magnetic “map” to direct their long-distance migrations, then switch to using chemical cues to home in on a specific stream–similar to the way we may use a GPS system to navigate on long road trips, then switch to following visual landmarks as we get closer to home. The authors say this study could explain why hatchery fish sometimes have trouble finding their way back to spawn: imprinting on a hatchery’s human-created magnetic field of electrical wires and iron-reinforced fish tanks could render the fish directionally challenged.