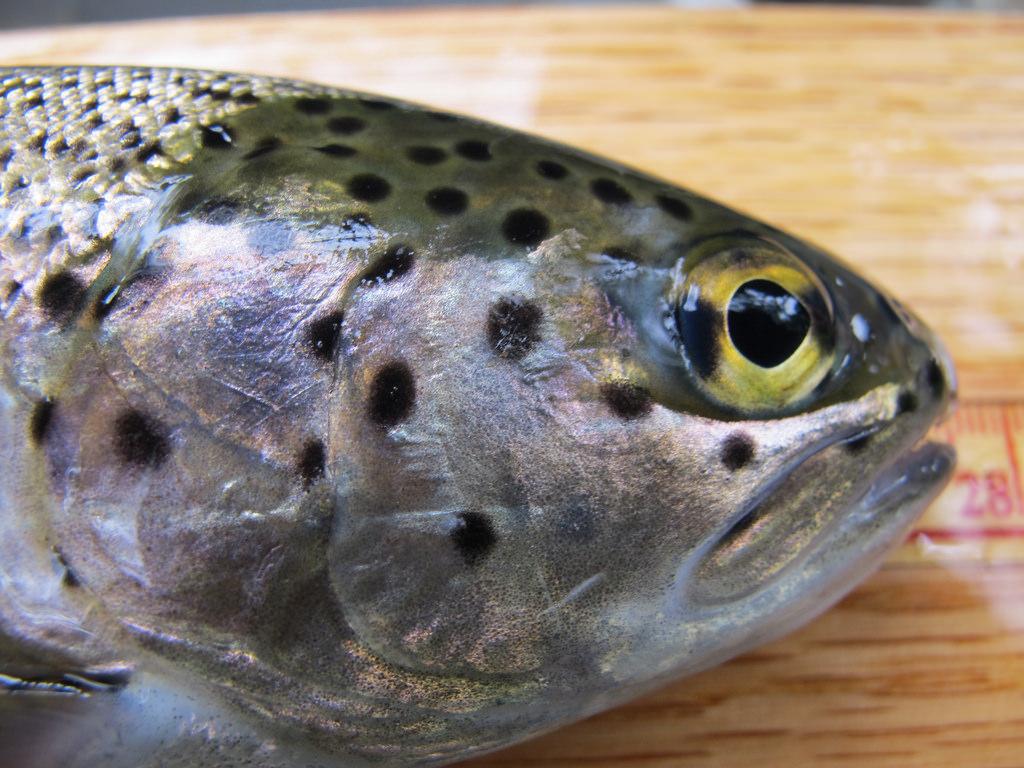 Some researchers spend so much time with the species they study that they eventually begin to recognize individual animals by their physical traits or unique “personality” quirks. It seems that researchers have been getting more familiar lately with fish that have spots: new studies show that these fish can have uniquely identifiable markings. If you’ve ever handled a trout, salmon, or even a smelt, then you may have noticed that these fish usually have small black spots or blotches on their sides, back, or head. Fish freckles are caused by the dark pigment melanin, and the amount each individual expresses is controlled by genetics and the environment, similar to freckles we get from the sun.

A few recent studies have taken advantage of new technology to identify individual salmonids by their unique spot patterns. In 2012, a study of juvenile Chinook salmon showed that not all fish develop spots or spot-patterns, but the ones that did had patterns that were recognizable by a computer algorithm even after they became adults (Merz et al. 2012). In another study on the spot patterns of Atlantic salmon, researchers were still able to identify fish by their spots after a period of 10 months (Stien et al. 2017). And a recent study of Delta smelt shows that they can also be identified by their spots using automated software or with the naked eye (Castillo et al. 2018).

The Delta smelt study may be a breakthrough scientists are looking for in order to save this critically endangered species from extinction. Because they are so small, rare, and live throughout the vast San Francisco-San Joaquin Delta and estuary, Delta smelt are extremely difficult for researchers to detect, capture, and study. Typically, researchers use surgically implanted acoustic tags when they need to keep track of individual fish for behavioral or survival studies. This technology has the advantage of being reliable and providing information on a fish’s location, but the tags can fall off, run out of batteries, and put stress on the fish. Even PIT tags, which are much smaller than acoustic tags, aren’t suitable for Delta smelt studies because the fish are so sensitive to stress that researchers don’t want to risk harming the already struggling population. Now, researchers may be able to tell if they’ve respotted the same Delta smelt by studying a picture of its tiny markings.

Advancements in fish identification technology, such as software algorithms that identify fish automatically by their markings from underwater photographs, could eliminate the need to handle fish altogether and would increase the sample size, ease, and accuracy of such studies. Researchers have also learned some pretty surprising and useful facts from studying fish markings, like that spottiness in rainbow trout and Atlantic salmon can be used to predict its level of stress tolerance (Kittilsen et al. 2009), and the spottiness of Atlantic salmon is partly determined by whether it was raised in a hatchery or in the wild (Jorgensen et al. 2018). Who knows what scientists will spot next?