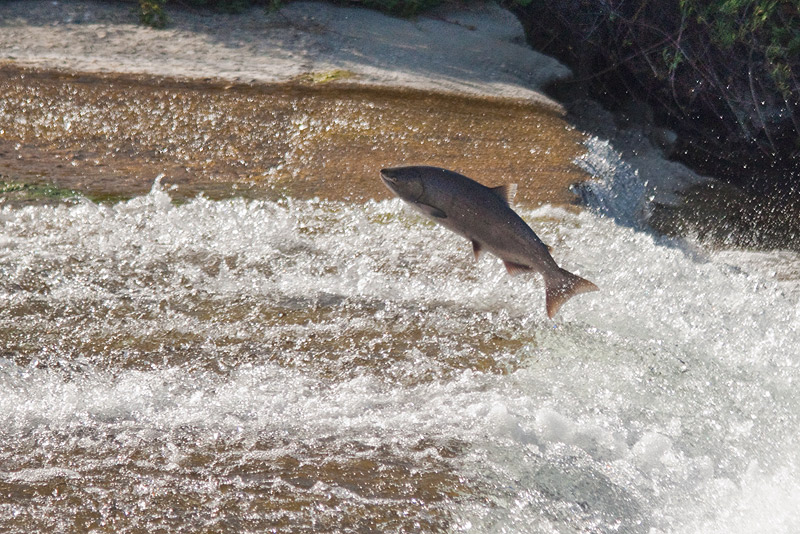 Last week we had the opportunity to observe spring-run Chinook salmon ascending the Parrot-Phelan diversion dam on Butte Creek near Chico. Currently the largest naturally spawning spring-run Chinook population in California, adult returns in Butte Creek have increased tenfold over the past decade. The increase has been attributed to habitat restoration, including the removal of four dams, the addition of eight adult passage ways and the installation of screened barriers to prevent juvenile fish from being diverted with water destined for irrigation.

April and May are peak months for upstream migration of spring-run Chinook salmon in the Central Valley. The migration typically coincides with runoff from snow melt, often allowing them to ascend farther upstream than would be possible during lower flows in late summer and early fall, when their fall-run conspecifics arrive back at their natal spawning grounds. Unlike fall-run fish, which arrive on the spawning grounds with fully developed eggs, spring-run Chinook enter tributaries reproductively immature and spend the summer in cold, deep pools without feeding. They rely exclusively on fat reserves they accumulated while feeding in the ocean to sustain survival and gonad development until they complete migration to their spawning grounds once water temperatures decline in early fall.  Since they are spawning earlier than fall-run Chinook, their fry will typically emerge from the gravel in December. A fraction of juveniles will out-migrate soon after emergence (December) while some will reside in freshwater for up to a year prior to migrating to the ocean. 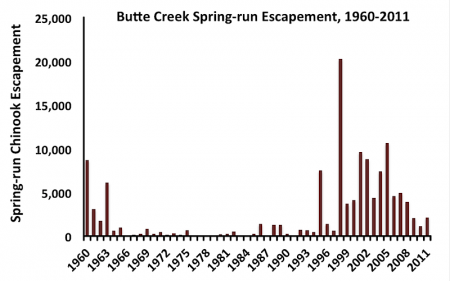 Despite recent population increases in some Sacramento River tributaries, spring-run Chinook in the CV are still listed as “Threatened” under state and federal legislation. Similar to other anadromous salmonids within the CV, their habitats have been highly impacted by the construction of dams and are currently found in a small fraction of CV watersheds they once occupied, including the Yuba and Feather Rivers, Big Chico, Deer, Mill, and Clear Creeks and, of course, Butte Creek.