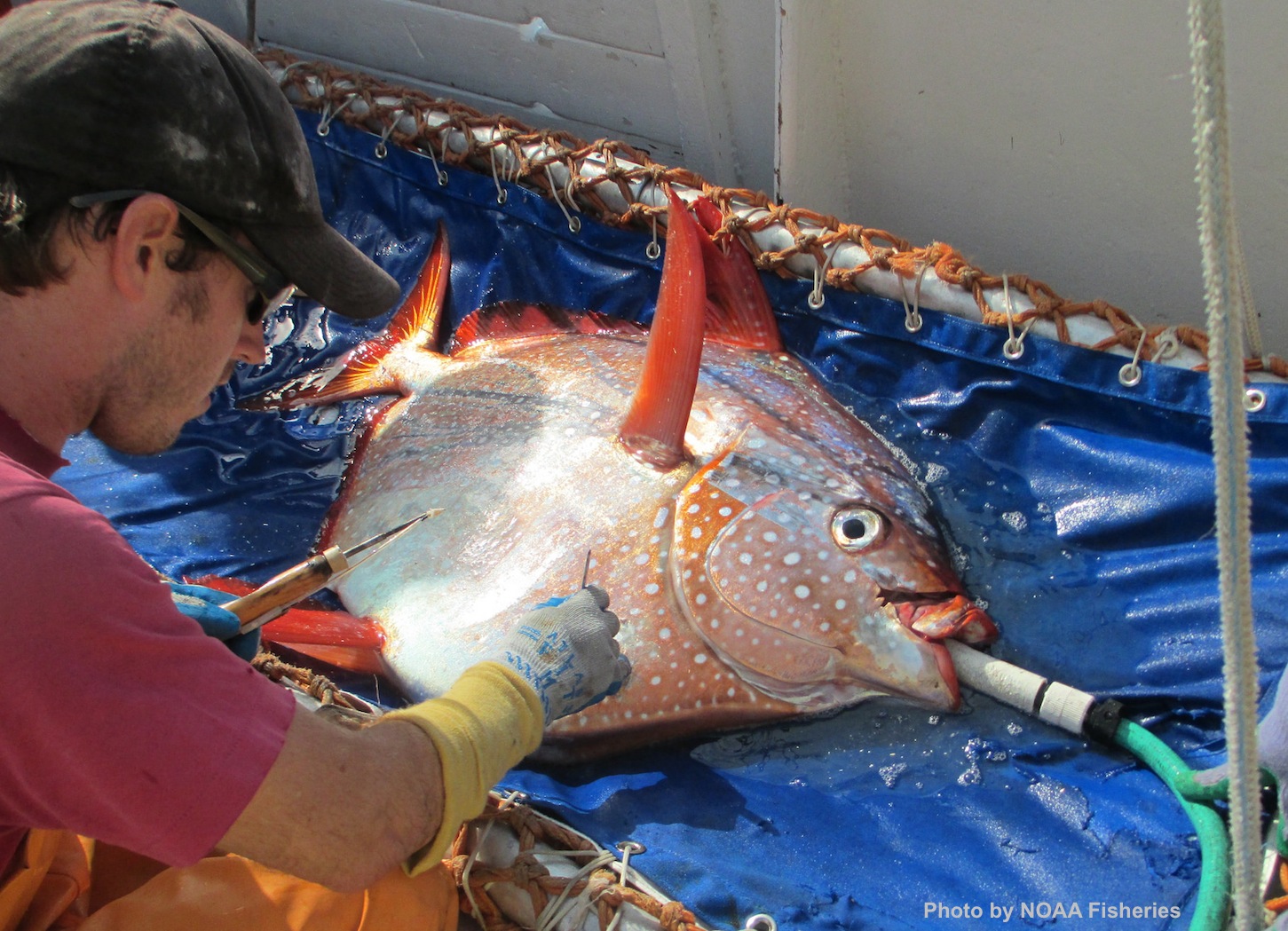 Fish don’t have a reputation for being particularly “warm” creatures – a heartless and unfeeling person is even referred to as a “cold fish.” But a recent scientific discovery has forced us to rethink what fish are capable of when it comes to regulating their body temperature. Scientists from the National Marine Fisheries Service recently described in the journal Science something never before observed: a fish that can keep its whole body warmer than the surrounding water, even its heart. The discovery comes in the form of the opah, a widely distributed but poorly understood fish caught in fisheries throughout the world, particularly in the North Pacific. Shimmering, speckled, and disc-shaped with bright read fins, opah are also called moonfish or kingfish. Once thought to be a single species (Lampris guttatus), scientists now believe from genetic work that the opah is actually made up of five cryptic species, which look identical yet are genetically distinct (Hyde et al. 2014). But the opah proved to have even more surprises in store.

Endothermy, or the ability to maintain a body temperature that is warmer than the surroundings, is extremely rare in fishes (found in less than 0.1% of those known to science). Even then, these fishes are “regionally endothermic,” meaning they are only able to heat parts of their bodies, like their swimming muscles or brains. These regional endothermics are typically “high performance” fish that are strong swimmers and active predators, like tunas, billfishes, and lamnid sharks (such as white sharks and mako sharks). Simply living in water presents a major challenge to endothermy because water is extremely effective at sucking up heat from anything coming into contact in it. Having gills is also problematic for the issue of heat in fish: in order to breathe, a fish’s tissues and blood must come into contact with cold, heat-stealing water just to extract oxygen. 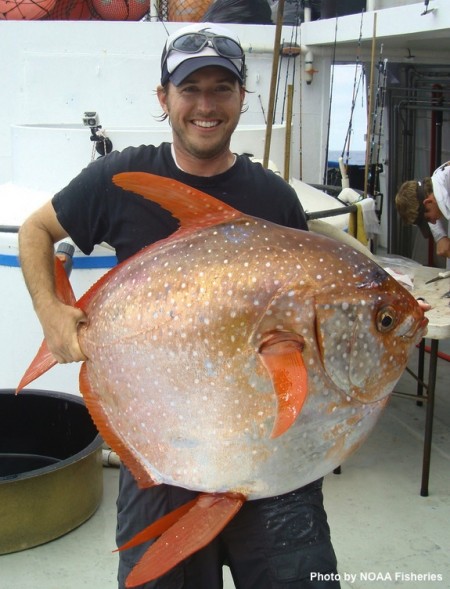 Many fish address the problem of heat loss with the help of structures called retia mirabilia (Latin for “wonderful net”), a criss-crossing bundle of red and blue vessels that creates a countercurrent heat exchanger. As warm, oxygen-depleted blood leaving the heart passes by cold, freshly oxygenated blood leaving the gills, heat passes from the warm blood to the cool blood. These retia mirabilia are often tucked near the swimming muscles, allowing the fish to keep these crucial body parts warm – but their hearts and the rest of their body remain “cold,” at the temperature of the water. The opah’s novel solution to this problem is having retia mirabila right at its gills, allowing heat exchange to happen at the point of contact with the water. This allows the cold, oxygenated blood from the gills to warm up before entering the rest of the body.

Finding these heat exchange structures in the fish’s gills while dissecting some opah tipped off the NMFS scientists that the fish had something special going on. They took temperature measurements throughout the body of freshly-caught opah, and also embedded temperature sensors in the pectoral fin muscles of other opah that they then released and recaptured. These two sets of measurements confirmed that opah can keep their whole bodies warmer than the water, even their hearts and brains. The pectoral muscles of the swimming opah were about 4.8˚C warmer than the surrounding water, while the freshly caught opah had elevated body temperatures of about 3.2˚C warmer at the heart, and about 6.0˚C warmer around the brain (Wegner et al. 2015). An opah’s core body temperature of 13.2˚C might not seem too toasty compared to a human’s of 37˚C, but it gives the opah a performance edge over other fishes in its cold ocean habitat.

The scientist’s findings suggest the opah’s endothermy is a special adaptation for living in deep, cold waters. Most regionally endothermic fish are active predators that spend most of their time in warmer water near the ocean’s surface (the top 50 m), with occasional deeper forays. These fish can’t warm their hearts, which limits their performance and ability to dive. By outfitting fish with archival tags that record their swimming depths, scientists showed that opahs spend the majority of their time below 50 m and can dive to depths of 400 m. There are many benefits for opah to keep their bodies warm while cruising the cold and dark ocean: warmed muscles allow them to swim longer, increase the rate of their food digestion, enhance the performance of their eyes and brain, and improve the fish’s ability as a predator overall. If that’s not heartwarming, we don’t know what is.