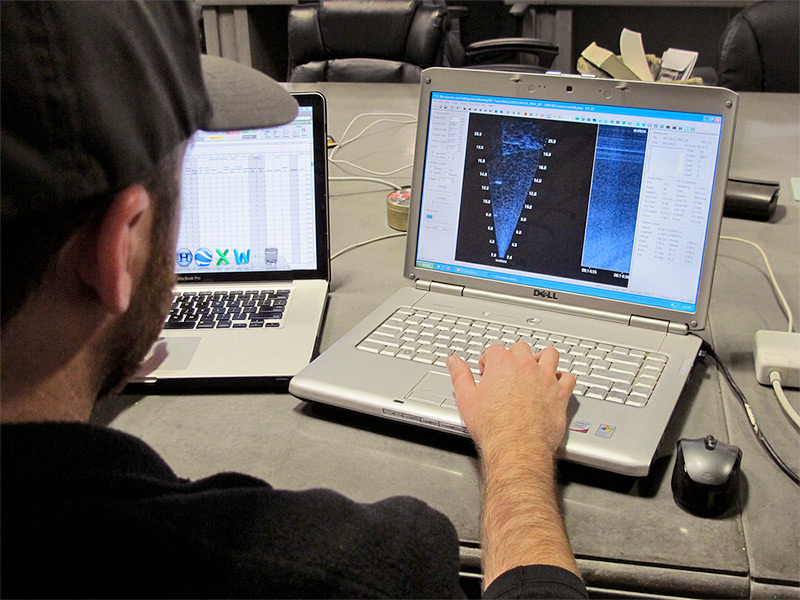 The life of a fisheries biologist can’t be all excitement and adventure in the grand outdoors. Processing and analyzing data is also an important, if less thrilling, part of the job. Reviewing DIDSON recordings has got to be one of the more monotonous tasks that come up around FISHBIO. It requires the full attention of the reviewer to study a grainy, V-shaped screen waiting for fish shaped figures to pass through the field of view (See San Joaquin sturgeon captured on DIDSON). DIDSON stands for Dual-frequency IDentification SONar. The University of Washington’s Applied Physics Laboratory initially developed this technology for the U.S. Navy, and fisheries biologists have been using it for fish research and monitoring for more than a decade.

The DIDSON is used like an underwater video camera, but has the advantage of being able to record images in dark and turbid environments. Scientists can review the DIDSON’s video-like images in real time or record them for later review. Reviewing the DIDSON images can feel a lot like staring for hours at the static “snow” channels of old analogue televisions and hoping for something to appear (see DIDSON video on the Delta). While Sound Metrics provides processing software that is supposed to turn days of footage into mere hours, this is usually best suited for conditions when fish are within close range. The DIDSON has a preferred maximum range of 24 meters for identifying and measuring objects, but when set at a range greater than 15 meters, it defaults to a lower frequency that results in a loss of image resolution. And in footage from a dam outfall like that shown above, turbulence creates millions of tiny bubbles that can make it hard to distinguish fish. So unfortunately for our biologists, there is not much to be done in this case to speed up the reviewing process.