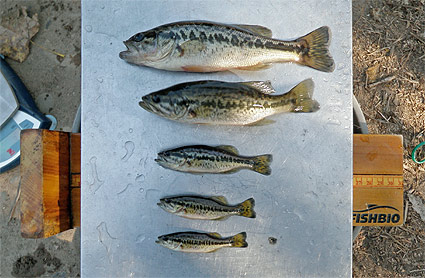 The Oakdale rotary screw trap (RST) was installed on October 11 to monitor the pulse flow on the Stanislaus River that occurred from October 14 through October 29 with the objective of evaluating yearling Chinook migration. The trap operated continuously from October 11 to November 1 and captured only 3 Chinook salmon. However, 366 small black bass (genus Micropterus) were captured during the sampling period, including 274 that were positively identified as largemouth bass. 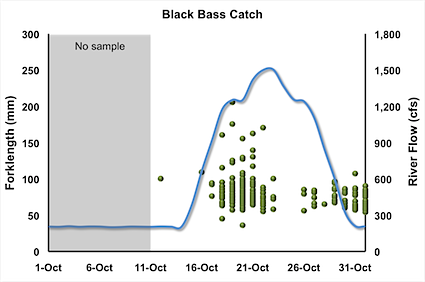 The peak catch of black bass occurred just after an increase in flow (see graph); however, since the RST was installed earlier than usual, data collected this year cannot be compared with previous years. Most of the black bass captured in October were identified as largemouth bass (n=274), several were identified as smallmouth bass (n=16), and some were not identified to species (n=76). As displayed in the graph below only 22 black bass were caught between January 1 and June 24, 2010 and all 16 fish caught on June 17 were unidentified black bass under 30 mm FL, which is the approximate size of a smallmouth bass (20-30mm TL) when it leaves the protection of the nesting area (Moyle 2002). 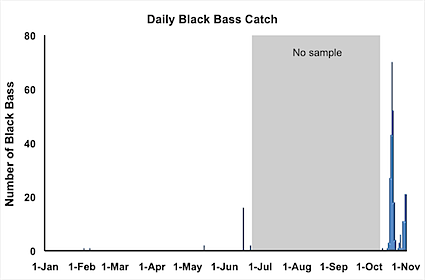 Largemouth and smallmouth bass spawn in the spring (usually March or April), when temperatures reach 15-16°C and continue through June. Growth in the first year can vary greatly for LMB, depending on a number of factors (e.g. food availability, temperature, etc.), but is more predictable for SMB. LMB can grow to 50-200mm in their first year, while SMB are generally 60-180mm by the end of their first year. Given these values, it is likely that all black bass caught in the RST this month were young-of-the-year, but it is possible some may be 1-year olds. Moyle (2002) notes that fry from the larger (and commonly earlier) spawning males are likely to be larger than the rest of their cohort since they have had more time to grow, which may explain the range in size of fish caught by the trap.