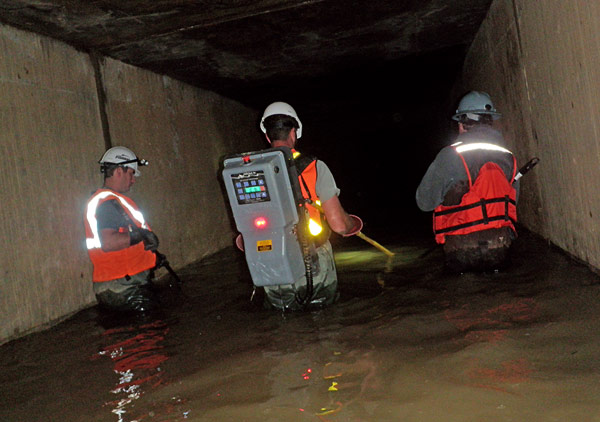 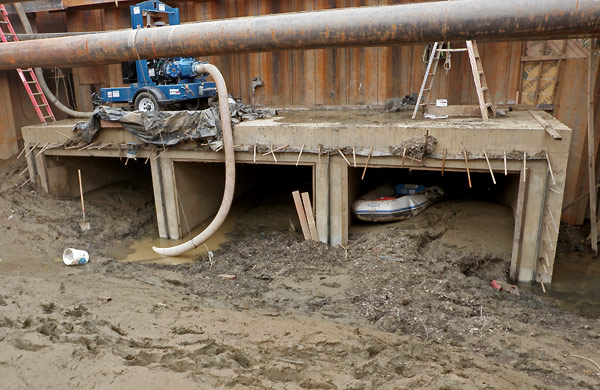 First off, these aren’t Ghostbusters exterminating ghosts, this field crew is all decked out for a mission to rescue fish. Our previous experiences with fish rescue at the Tehama-Colusa Canal Authority Fish Passage Improvement Project in Red Bluff have taught us to always expect the unexpected. In December, we found ourselves electrofishing from a boat inside a coferdam (Water + Steel + Electricity = ?); and in January, we slogged through waist-deep mud (A Muddy Situation). Last week, we knew we were in for another adventure when they warned us that we would be receiving ‘Confined Spaces’ training prior to conducting the rescue. We arrived at the site to find that the roughly 400 foot-long cement siphon tunnels under construction were flooded during the recent high flows. As the water receded, fish, mud, and some debris were trapped in the tunnels. After receiving training on how to safely operate in a confined space, we entered the tunnels armed with our safety gear and our atmosphere monitor that would alert us of potentially hazardous changes in the air we were breathing. We used a backpack electroshocker, a seine net, and hand nets to corral and capture the fish, which was definitely easier said than done. The quicksand-like mud that hampered our last rescue operation was still present, and we had the additional challenge of working in the dark. Once the fish were captured, they were hauled in buckets over the 30 foot cofferdam walls and released into the Sacramento River. There’s no telling what we might encounter on our next trip.