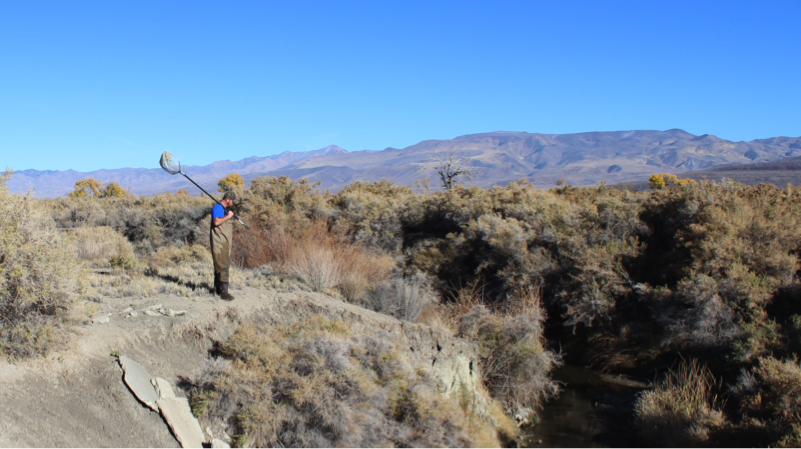 Seemingly a world apart from the waterways of the Pacific Northwest that flow to the ocean, streams like the Walker and Carson rivers that drain the eastern side of the Sierra Nevada dissipate into the high desert landscape of western Nevada. This area was historically submerged by Lake Lahontan, a large lake nearly fifty times as large as modern day Lake Tahoe, and almost 1,000 feet deep during its peak about 12,000 years ago. Pyramid and Walker lakes are the only true remnants of Lake Lahontan, yet its former extent is reflected by the current distribution of fish species that used to inhabit the ancient lake and its tributaries.

The fish species native to this area are now largely confined to remnant wetlands, small canals, sloughs, and drains. These hardy fishes exhibit a remarkable degree of physiological tolerance that helps them survive the harsh and highly variable conditions of the desert climate. FISHBIO recently had the opportunity to sample the fish community in a small slough historically connected to Nevada’s Carson River, and were able to document a number of fish species that brave conditions far too harsh for the majority of species we typically work with.

Among those species were the Lahontan redside (Richardsonius egregious, pictured above), a small minnow that displays striking coloration during the reproductive season, and tui chub (Siphateles bicolor), another hardy cyprinid know for its ability to thrive in a broad range of environments. Both species can tolerate alkaline waters, high temperatures and low oxygen levels – in case of the tui chub, this includes pH greater than 10, temperatures above 95 °F, and oxygen levels less than 4 mg/liter  (Castleberry and Cech 1986, Falter and Cech 1991, Vigg 1980). Both fish are omnivores that feed opportunistically on a broad range of invertebrates, and detritus often comprises a large portion of their stomach content (though it is difficult to quantify the nutritional benefit of this material). Through such physiological and behavioral adaptations, these species are able to persist in the seemingly most difficult place for fishes to live – the desert.