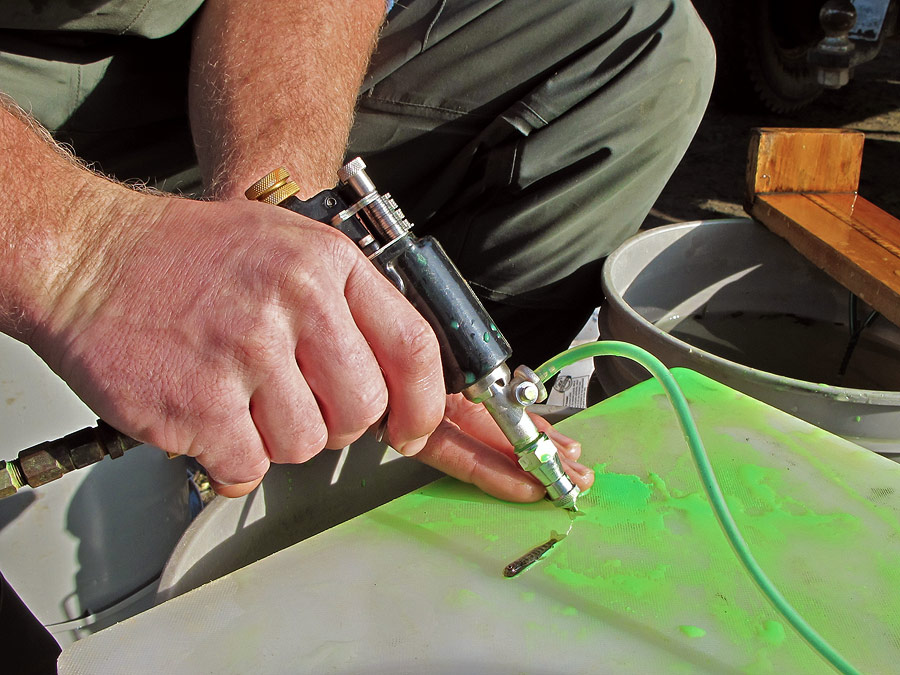 Rotary screw traps only catch a small proportion of the salmon migrating past the traps, so in order to estimate the total fish production on a given stream, tests must be conducted to determine the portion of fish caught by the trap (trap efficiency tests). Efficiency tests are essentially mark and recapture experiments. A known number of marked fish are released upstream of a rotary screw trap and a proportion of those fish are recaptured in the rotary screw trap downstream. Each time a trap efficiency test is run, the resulting proportion and the daily catch are applied to an efficiency model to estimate the total number of salmon migrating past the trap (USFWS 2008).

To conduct an efficiency test, a sample of juvenile salmon captured in the rotary screw trap are marked with phototonic colored dye. The fish are temporarily anesthetized and a marking gun uses compressed air to force a small amount of dye into the fish’s fin tissue (see our previous post on fish marking, Splat!). One of the advantages of photonic marking is the ability to use different colors and mark locations to distinguish between release groups. Although the dye initially appears quite bold, it quickly fades to a faintly colored mark. Once fish are marked, they are held in a net-pen in the river for 24 hours to recover. Prior to release the fish are checked to see if they retained a distinguishable mark and an accurate count is conducted. To help visualize the dye, the fish is placed on a black background and illuminated with an ultra violet light. Marked fish are released upstream of the rotary screw trap just after sunset when most juvenile salmon are actively migrating. The rotary screw trap is checked at hourly intervals until marked fish are no longer captured.

Variable environmental conditions (flow, turbidity, temperature, etc.) and changes in fishes’ swimming behavior can affect the efficiency of the trap. For example, at higher flows the volume of water passing the trap is greater, therefore the proportion of river sampled by the trap is reduced. Additionally, as fish grow and become stronger swimmers, they may be able to avoid the trap, reducing the trap’s efficiency. Therefore, trap efficiency tests are conducted regularly throughout the monitoring period. The final post in the rotary screw trap series will describe how the trap efficiency data are used to estimate the total abundance of juvenile salmonids.