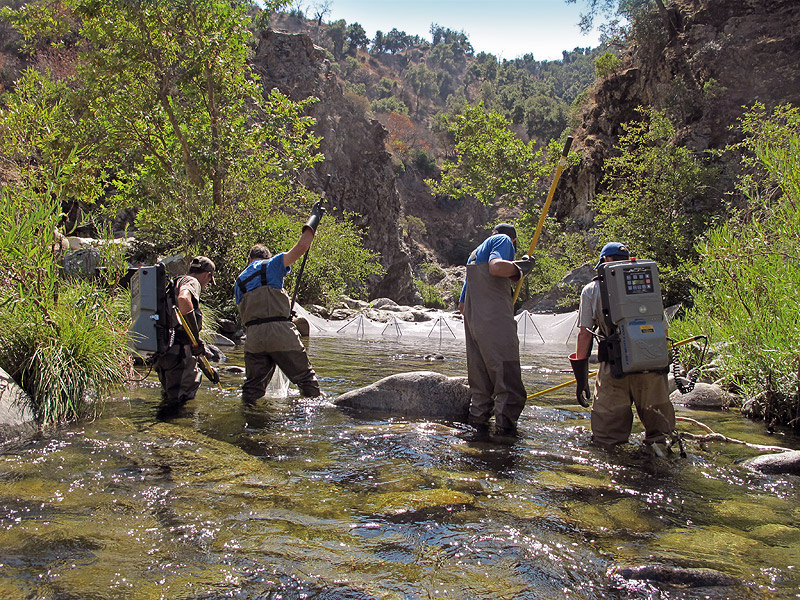 Backpack electrofishing has been a common tool for sampling salmonids for decades. Similar to the snorkel surveys we use in deeper rivers, backpack electrofishing is often used to estimate the abundance of fish in a shallow river or stream. During this process, there are teams composed of a “shocker,” the person operating the electrofishing unit, and at least one “netter” to quickly scoop up the momentarily stunned fish. The number of teams depends on the width of the stream, since the teams form a line and move together upstream as they shock. The goal of staying in line is to ensure uniform sampling effort across the width of the stream and to prevent fish from slipping back downstream behind the shockers.

There are several assumptions associated with this abundance estimation method (Temple and Pearsons 2007), including the important assumption that the fish are in a “closed population.” Essentially, we assume that as the teams pass upstream and sample, the fish are not eluding capture by moving further upstream. To avoid this, we place a block net at the top and bottom of the stream segment, temporarily trapping the fish. Of course, there are always some fish that elude capture the during the first pass upstream; thus, a common method is to use three or four passes in each stream segment to account for this, a technique called “depletion” or “multiple-pass” electrofishing.