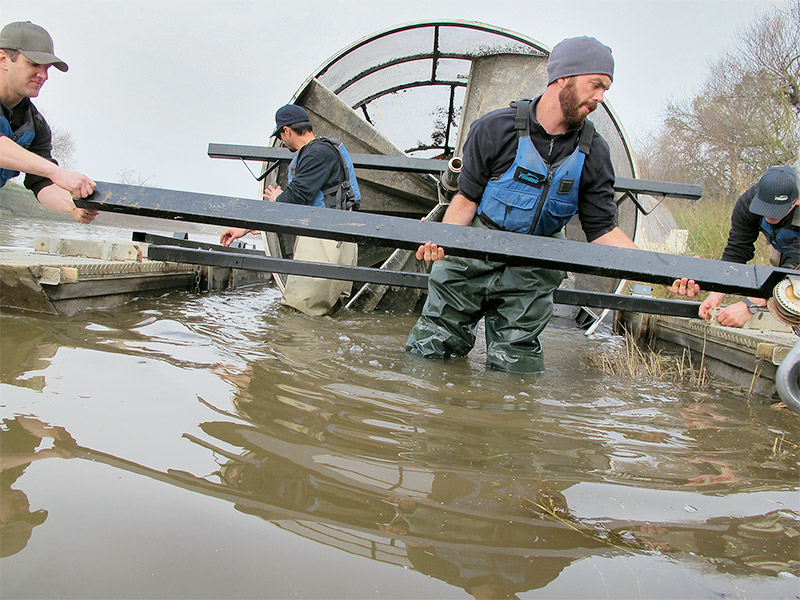 For many, the New Year is the mark of new beginnings and wishes of a prosperous year ahead. For us at FISHBIO, January means it’s time for our annual task of installing rotary screw traps (RST) to monitor juvenile salmon and steelhead (see Catch me if you can, The count is on). Each winter, we haul the traps out of storage, carefully inspect them, and make any necessary repairs, such as replacing pop-rivets or damaged parts. Then we load the RSTs onto specially built trailers and transport them from our shop to the field sites for assembly. At most sites, we can assemble the traps in the water close to their sampling locations, then drift or tow them into position. Occasionally, if access is limited, we have to assemble the trap on shore and use a crane to lift the entire apparatus into the river.

Using hand tools and knowhow, our crew makes quick work of putting traps together and getting them ready for sampling (see video). To assemble an RST, we first position the cone (large cylindrical drum) between two pontoons, then bolt crossbars to the pontoons. The cone has an aluminum shaft running down the middle that we insert into nylon collars at the bow and stern of the trap—this allows the cone to rotate freely under the power of passing water. The mouth of the cone, which measures 5 or 8 feet in diameter, points upstream. We mount an A-frame pulley system at the bow of the trap to raise the cone mouth out of the water when it is not fishing. At the smaller, downstream end of the trap, we mount a livebox between the two pontoons that sits mostly underwater. Fish are funneled into the livebox and are held temporarily until a technician scoops them out to measure, count and release them (see Efficiently incarcerating adolescent fish). The RSTs are held in position by cables attached to the front of each pontoon and either fastened to the riverbank, anchors, or a cable stretched overhead across the channel. Juvenile salmon are starting to emerge from their gravel nests to begin their journey out to sea. When they do, we’ll be ready for them. 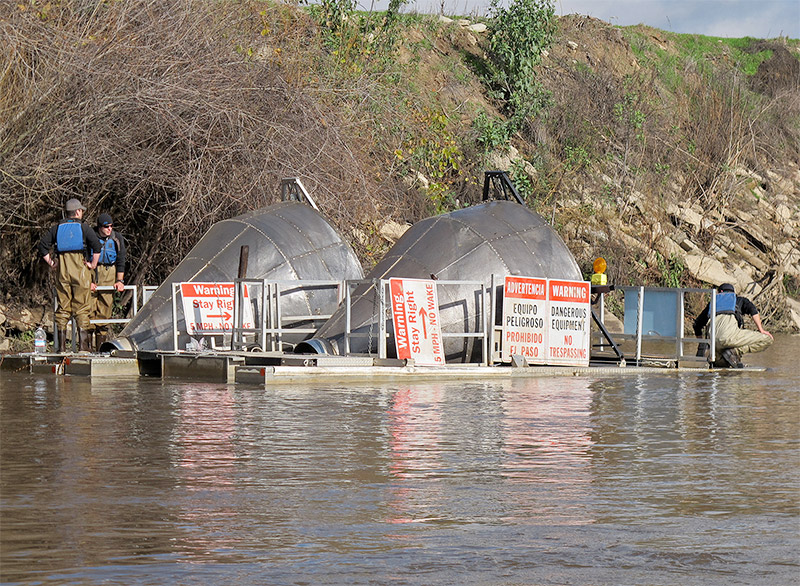