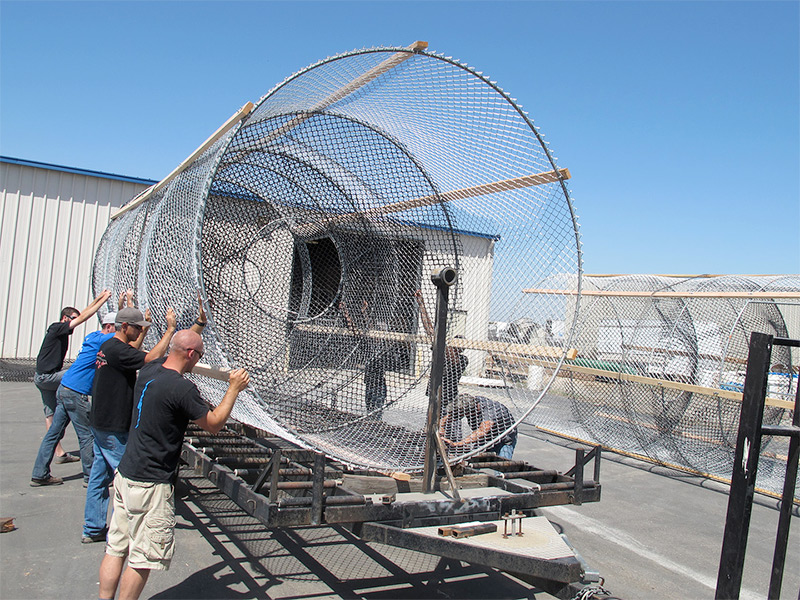 Catching a big fish requires a big trap. FISHBIO recently initiated a trapping and tagging study of striped bass on the San Joaquin River, and we’re using fyke traps to catch these large, anadromous predators. Fyke traps have been used around the globe for centuries to catch a variety of aquatic species. A fyke trap is essentially a pen or cage with a funnel-shaped opening that narrows toward the interior of the structure. Migrating fish follow the funnel and swim into the opening of the trap. Once inside, they have a difficult time finding the opening to escape because they tend to keep close to the outer walls of the trap.

We opted to use a trap design that the Department of Fish and Wildlife (formerly Department of Fish and Game) has used in the Sacramento River since the 1950s, first to estimate salmon and steelhead runs and later to estimate striped bass populations (Hallock et al. 1957). The fyke traps are large cylinders 10 ft. in diameter and 20 ft. long—and unfortunately, they are not readily available for purchase.

With a little research and a visit to see CDFW’s traps, our Fablab made quick work of building a couple of fykes. They started by rolling and welding steel pipes into 10 ft.-diameter circles for the frame and smaller circles for the interior cones. Then they welded the frame together, forming something resembling the nosecone of a rocket. Our technicians stitched together and cut plastic fencing to form the cone shape of the fykes. The design we used includes two fykes within the trap that feed one into the other. The inner funnel has a smaller opening that leads to the trap livewell, making it more difficult for the trapped bass to find an exit. We wrapped the entire cylindrical structure with chain-link fencing and added a couple of access doors to the sides of the trap. Once completed, these behemoth fyke traps were loaded onto trailers, transported to our sampling sites, and rolled into the deepest portion of the river channel. Watch for future posts on the success of our trapping effort!