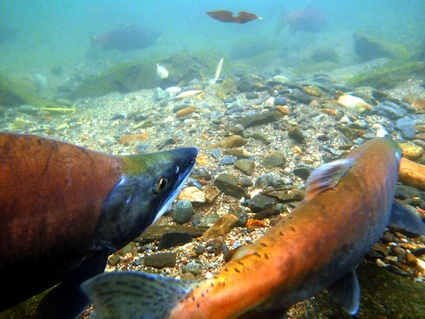 Kokanee salmon are landlocked sockeye salmon planted in many reservoirs for sportfishing throughout the U.S. Sea-run sockeye are not alien to California since they have been known to occur in the Sacramento River, but the landlocked form is considered an introduction since no similar stock was present historically.

Kokanee are planktivors that do not compete well with other filter feeders, such as threadfin shad, which have out-competed kokanne in lake Shasta. Although they may compete with juvenile trout for food and space, and with adults for spawning habitat, there is no evidence kokanee negatively impact trout populations where they co-occur. There is also no evidence that juvenile kokanee provide significant forage for larger trout in reservoirs.

These fish were captured spawning in a tributary to a large California reservoir. Kokanee migrate into tributaries to spawn between August and December, depending on temperature and other factors.