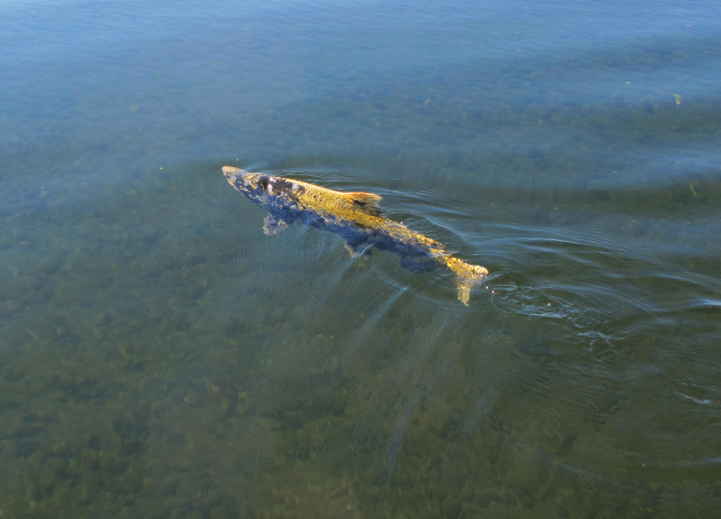 Success for a Chinook salmon is defined as successfully spawning once, then dying – a reproduction strategy known as semelparity. Most do not meet this goal of ever reproducing, falling short in a variety of ways. Death can come early in life, as eggs or parr, or late, as smolts or adults. Seems like a risky proposition, right? Not surprisingly, this type of reproduction strategy is not a common strategy among vertebrates, likely due to the high risk of not being able to reproduce. The most common reproductive strategy in fish is iteroparity, which is defined as multiple reproductive events over the course of a life time. Another salmonid species native to Central Valley streams, known both as rainbow trout (fish living only in freshwater) or steelhead (fish that migrate to the ocean), is iteroparous, meaning that its reproductive output can be spread out over several years if adults survive throughout that period.

On an evolutionary timescale, environmental conditions can favor one strategy over the other, with semelparity often favored when survival conditions are poor for adults and better for their offspring. Iteroparity is generally favored when survival conditions are poor for juveniles and generally better for adults, given that the adults can survive to reproduce multiple times. Species with the semelparous strategy are also generally more fecund, or have more offspring at one time, than species that are iteroparous. However, total reproductive output between the two strategies tends to be higher in iteroparous species, since they typically can reproduce multiple times as opposed to just once.

While Chinook salmon give it their all during their one opportunity to reproduce before they die, researchers have found that iteroparous salmonid species, such as bull trout and lake trout, can actually skip reproductive events for the year if conditions are poor, including a lack of quality mates, poor physiological conditions, and/or unfavorable environmental conditions (Johnston and Post 2009, Morbey and Shuter 2013). This same tactic of “wait and see” has also been observed in salamanders, birds, and mammals, as well as a variety of other iteroparous fish species, such as Atlantic cod, Atlantic herring, winter flounder, and white crappie (Jørgensen et al. 2006, Engelhard and Heino 2005, Bunnell et al. 2006). When time is on your side, these animals have benefited from not rushing to reproduce.