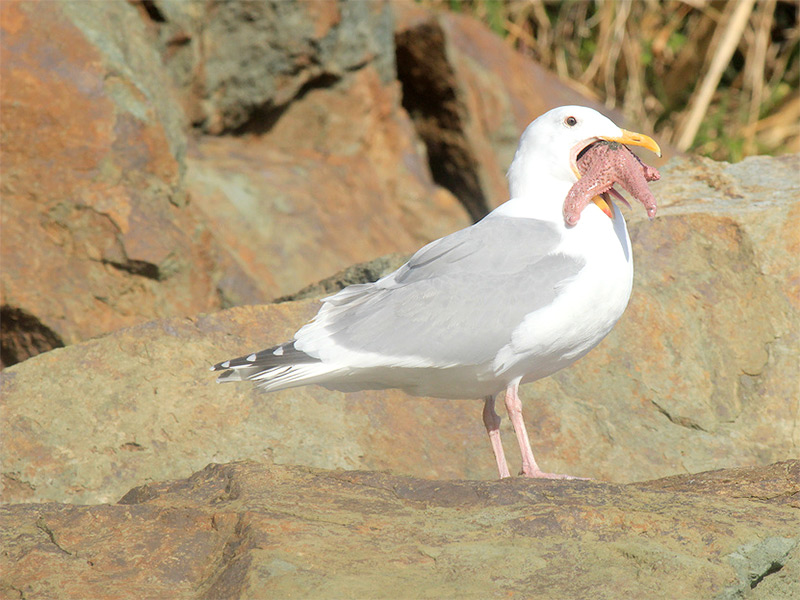 It’s easy to find evidence that gulls can be aggressive foragers. Anyone who has watched a flock of gulls descend on food scraps, creating a feathered flurry of squawking and bickering, can attest to the voraciousness of these seabirds. While able to ingest seemingly large items (like a stolen sandwich) in the blink of an eye, it sometimes appears that a gull’s eyes are bigger than its stomach. The sea star this gull tried to eat is clearly not an easy meal, at least not without being picked to pieces.

Though it may seem nearly impossible for a bird this size to squeeze such a large prey item down its gullet, various gulls have been documented ingesting whole seas stars in one gulp. They accomplish this feat by scarfing down two of the victim’s five arms simultaneously, then waiting for the sea star to relax its other arms for easier gulping. Gulls may also attempt to force the star into a shape more conducive to swallowing by bending its arms against rocks or other substrate. While gulls are clearly among the few natural predators (in addition to otters, crabs, and some species of fish) able to feed on these stiff intertidal echinoderms, it would be quite a stretch to claim that sea stars are a snack that goes down easily.